Does UK’s Phillips know something the rest don’t? 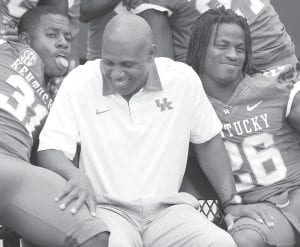 Make no mistake about what I’m about to reveal to readers of this column. When Joker Phillips stepped up to the podium underneath Commonwealth Stadium to begin his third season as head coach of his beloved Kentucky Wildcats, he was as excited, animated and confident as I’ve ever seen him during his career as a player, assistant coach, coordinator, and now head coach.

I was sitting with the rest of the state’s sports media contingent wondering how he could be so enthused and confident about his team given the way he has been treated by many in the school’s fan base.

Was it all a schemed up ploy for the media to pick up on and sell to those disgruntled fans of Big Blue Nation? The longer it went the more I bought into it, and I’ve seen 44 years of UK football as an adult and heard many of these opening remarks by several different coaches.

Then it hit me: There is nothing more intoxicating than being around today’s youth, especially the 18 to 22 year old age group. Sometimes they’re a little cantankerous and will at times try to swallow an elephant and then turn around and choke on a gnat, as the old saying goes, but they’re never without confidence and enthusiasm.

I’ve learned during the 8-1/2 years since I’ve retired from high school athletics that even though the electronic quick-fix age of sports can sometimes be a little too much for those of us who are more traditional, it’s very important and many times gratifying when we surround ourselves with youth in as many areas of our lives as possible.

Last Friday at UK’s annual football media days it was refreshing to be talking to and in general simply experiencing the college football players life through the interview process.

After one day of interviews and the “eye test,” I came to the conclusion that this Kentucky football program is in much better shape than what may be believed by the Fellowship of the Miserable Club who have dominated the social and electronic media scene since last November.

I’m not saying this program is ready to go from 5-7 to 8-4 or dare I say 9-3 in 2012. What I am saying is this football team has more SEC-type bodies across the roster than I’ve seen in several years, but they are all just starting to mature mentally, physically and emotionally. When I looked into their eyes I saw an enthusiasm and a will to win like I’ve never seen before in the same setting with the same team, albeit with a few newcomers just brought into the program.

But most impressively, I saw a group of football players and coaches who are really looking forward to proving their worth in the future. I hope they get the chance to do it together.

I sometimes get a little critical of my brethren in the media, especially the print media. Although I have been writing a column for 7-1/2 years, I still have a hard time considering myself an actual media person, but I’ll plow on and hopefully keep a friendship with a select few of them. About 24 hours after UK’s media festivities finished up and I had returned home to begin this week’s column, all I read and heard is how much of a bad blow it was to this year’s UK defense to lose sophomore defensive back Marcus Caffey.

Please spare me this bit of drama. The guy has never played a snap at defensive back and wasn’t recruited for the position and just spent two full years of playing football as a running back.

If he is so special to this years defense, why is he just now starting his career at the position?

Let’s begin with the UK safeties who are very green and untested but may be the most talented and biggest surprise of the 2012 season. Now that Joker Phillips has announced that Martavious Neloms has been moved back to corner, it opens up more time for two prized recruits in young pups like Ashley Lowery and Glenn Faulkner.

Benton came in as an instate freshman walkon, but has learned the trade well, according to the coaching staff, and has the utmost respect from everyone in camp. Tyler, the lone junior in the backfield and one of the most athletic players on the UK roster, had a spell that put him in the coaching staff ’s dog house not long ago and cost him some playing time, but he is back in good graces and reportedly ready too upgrade his position with solid SEC-type play while Faulkner and Lowery are set to showcase their skills that made them high profile recruits just two years ago.

Incoming freshmen Josh Harris of Mason County and Sterling Wright of Miami, Florida will be pushing all these guys for reps in fall camp and may get on the field at some point if injuries occur but most of the incoming freshman are set to be red shirted if at all possible according to the defensive coaches.

Martavious Neloms, a 6’ 1” 186 lb. senior, will start as the shutdown corner since his experience is at a premium with this years corner back crew and he will be backed up by a 6’ 0” 195 lb. sophomore in Eric Simmons, who has been through the wars of Alabama high school football in recent years plus one year of nickel back duty as a freshman at UK last year.

Cartier Rice, a 5’ 10” 185 lb. senior who has been through many SEC wars and seen his fair share of opposing players’ behinds that he’s chased down the Commonwealth Stadium turf the last three years, will hold down the corner opposite Neloms, at least starting out in fall camp. He will be backed up by Eric Dixon, a promising 5’ 11” 185 lb. true sophomore who came to UK with high accolades.

Incoming freshmen Cody Quinn of Middletown, Ohio and Jonathan Reed of Indianapolis could and should make a significant contribution to the cornerback position.

Final analysis: What could be an asset to this year’s defensive backfield that hasn’t been there many times in the past is a quality pass rush from the Wildcat defensive line and added pressure from those hybrid linebackers that can make defensive coordinator Rick Minter’s blitz packages very challenging on the passing game at times.

With the situation this coaching staff is presently in, I can see them throwing the kitchen sink and anything else they can get their hands on, especially early in the season to try and turn a negative into a positive.

Look for this defense and it’s coordinator to have a river boat gambler’s mentality early, because they have nothing to lose — well, except their jobs.

Next week we will look at the linebackers and special teams.