Dog is bitten by copperhead 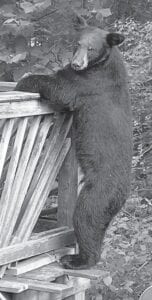 Many bears have been seen on Cowan.

Hello everyone. It’s hard to believe we are halfway through August. We’re still dealing with the coronavirus and all the ‘stuff ’ that goes with it. Since I’m not watching much news, it’s easier to handle. When someone posts something on my social media site that I don’t like, I delete the post. I’m trying to keep everything positive around me.

My aunt, Ramona Caudill, gave us some green beans and corn. They were good. Thank you so much for the produce. I will admit this was the first time I ever cooked green beans and I was impressed. Mike is not a green bean fan but he said they were good and he ate them. I liked the recipe I used and I plan to use it again.

Bob Caudill and Randy Brown went fishing for a few days last week. They do enjoy their fishing trips and times together.

Kathy LaMonte of Clinton, Miss., came in for a few days. She has a place down from ours. It was good to see her and spend time together. I told her I felt like she made the trip just to see me. We did so much talking while she was in. She only had a chance to spend three full days.

Our son Greg came in on Saturday. He was planning to surprise me and he had sent his uncle a text saying ‘see you at 5:30’. My brother sent me a message asking if Greg was coming in. I said I didn’t think so. Greg had called earlier in the day to talk to his dad so I asked Mike if Greg was coming in. Mike said he was sworn to secrecy and it was a surprise. It was so good to see Greg. He was on vacation and came in to spend a couple days with us.

Mike, John, Greg, and I had breakfast together at Pine Mountain Grill. It was nice eating outside.

Belated birthday wishes are being sent to John Banks of Cowan. I hope he had a great day.

My cousin Donna Watts posted on social media a picture of a bear that she had taken. The bear had been behind Relections and Little Caesar’s Pizza. The bear looked huge.

We saw David Day at Pine Mountain Grill. He has been dealing with a bear or bears in his neighborhood. There are definitely a lot of bears in the Cowan area.

A year ago my cousin Kathy LaMonte ended up with a book she got from the Mission in Eoila. She didn’t open the book until this past week. Inside of the book was a driver’s license that had been issued on September 15, 1934 to a 20-year-old male of Jenkins. The license cost fifty cents and did not have an expiration date. The man’s name was Kermit Hayes. According to the license, licenses were not required until July 1934 so he had one of the first operator’s licenses in the county. It’s an interesting piece of paper. I have the license in case we find a family member.

Get well wishes are being sent to cousin Jim Caudill. He was admitted to the VA Hospital in Lexington. Hope he gets out soon.

Kendall Ray Boggs, age 74, passed away on August 15, 2020. He is survived by two daughters, Shannon (Scott) Trent and Tabitha (Norman) Lewis. He had one sister, Meledia Ison and one brother, Cassell Boggs.

The funeral was on August 17, 2020 at Kings Chapel Church. Burial was at Boggs family cemetery on Cowan.

Kentucky schools will be working online until the end of September. I’m glad the schools are doing this.

I do believe in wearing masks and I hope the students and teachers going to school in person are able to handle the masks for a long period of time.

This week’s quote is attributed to Ernest Hemingway: “In order to write about life first you must live it.”

Have a good week. Stay safe and healthy.