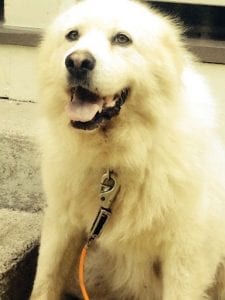 This Great Pyrenees named Lady Fluff has been nursed back to health by the Breeding family of Whitesburg and is ready for a new home.

A Whitesburg family has been caring for a Great Pyrenees as they try to find the dog’s owner.

A relative of Pauletta Breeding found the dog on the side of a Whitesburg road in April and Breeding agreed to care for the animal while its owner was located.

Four months later, Breeding and her family are still taking care of the dog but sense the animal wants to return to its original home.

“She is a great dog, but she always tries to get away like she wants to go home,” said Breeding. “When we found her she had on a pink and purple collar. (She) could sit and shake. She is housebroken and loves to ride in a car, so I know someone really loved her.”

The Breedings had the dog’s matted coat sheared.

“She is back to her beautiful white coat,” said Breeding. “We call her Lady Fluff.”

Breeding has posted photographs of the Great Pyrenees on Facebook, but no one claimed the dog, which tested positive for heartworms and is being treated.

Lady Fluff will be sent to the Great Pyrenees Rescue after heartworm treatment is completed if no one claims her or is interested in adopting her.

“She gets along good with my cats and my big dogs, but hates my little yappy dogs,” said Breeding. “I would like to find the owner or someone with a fenced yard,” she said.

Since Lady Fluff has been staying with Breeding family, Breeding said the Great Pyrenees appears to have gained 20 pounds.

“She is well taken care of and fed,” she said.

The Great Pyrenees is a large dog bred to guard flocks of sheep on steep hillsides.

“ You wouldn’t believe how many people here in the county shelter those animals until they can find a home for them,” said Ward.

Tom Caudill, manager of Kentucky River Regional Animal Shelter (KRRAS), said the county dog warden brings 25 animals a week to the shelter and five to seven animals are brought in by the public.

“That keeps us in a bind because we get more calls than that,” said Ward, who is a member of the KRRAS Board of Directors. “Overpopulation is a problem at the shelter. Spaying and neutering are key.”

Ward said new programs provided by the animal shelter, which also serves Breathitt, Knott and Perry counties, give people who meet income eligibility guidelines a way to have pets spayed or neutered at a reduced cost.

With the “Spay It Forward” program, animals are taken to the Kentucky River Area Development District (KRADD) office in Perry County. The animals are then transported to Jackson to a veterinary clinic, where they are spayed or neutered and then brought back the following day to the KRADD office for pickup.

The animal shelter pays $20 and the person who is having the pet spayed or neutered pays $30.

With the “Field to Foster” program, the mother dog is transported to be spayed. The owner keeps the puppies for two weeks and then the puppies are taken to a rescue.

Breeding and shelter representatives, along with adoptable dogs and cats, will be at a tent at the Mountain Heritage Festival. As a fundraiser for the animal shelter, chances will be sold for a University of Kentucky gift basket with two lower arena tickets to a UK basketball game.