Dog rescued here ends up in home of actor’s parents 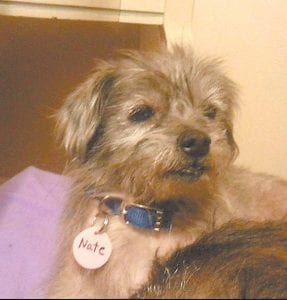 Nate, a three-year-old terrier, was rescued in Letcher County and has been adopted by Nick and Nina Clooney of Augusta. The adoption was arranged by their son, actor George Clooney.

Payne Gap resident Dana Outlaw jumped up and down with excitement when she found out that a three-year-old terrier she had sent to an animal rescue in Ohio had been adopted by movie star George Clooney as a Christmas present for his parents.

“ To think where that baby came from and where he is now,” said Outlaw. “I’m hoping it will motivate more stars to do the same.”

The dog, named Nate, was one of 11 terriers and Chihuahuas that Outlaw gathered from what she termed a hoarding situation in Letcher County and transported to Hazard in her Toyota Camry last March 23. A volunteer with Luv Fur Mutts Rescue met Outlaw in Hazard and took the dogs to Fairfield, Ohio for volunteers there to foster until permanent homes could be found for the dogs.

“It was terrible,” said Outlaw. “The dogs were in horrible shape. They had skin conditions. Eyes were messed up. Teeth were bad. Some of them were hungry. A couple of them were having seizures. I thought they were going to die on me.”

Nate was malnourished when Outlaw found him. He was left with birth defects and a leg that sways.

“His chest was real big and his head was small,” said Outlaw.

Luv Fur Mutts tried for nine months to find a home for Nate. At adoption events, people stared and pointed at Nate. A woman cried and said she would be depressed the rest of her life if she had to look at the terrier every day, according to the Luv Fur Mutts website.

A volunteer with Luv Fur Mutts posted a video clip of Nate on YouTube in hopes that someone would watch and want to adopt the terrier. Clooney was among those who watched the video clip and showed it to his mother, Nina. Then George Clooney asked his father, Nick, what he thought about the way the terrier walked. Nick Clooney, who is a retired journalist and anchorman in the Northern Kentucky/ Cincinnati area, told his son that it appeared the dog gets around just as well as the elder Clooney and his wife do, according to the Luv Fur Mutts website.

When they saw the video of Nate, Nick and Nina Clooney’s terrier of 10 years had recently died and George Clooney wanted them to have another dog. George Clooney’s assistant contacted Luv For Mutts and had the dog delivered to his parents’ home in Augusta, Kentucky, a community located along the banks of the Ohio River in Bracken County, on Christmas Eve.

“They brought him on and now he’s the love of their lives. They love him,” George Clooney told television’s “Entertainment Tonight.”

Nate is one of many dogs Outlaw has saved for rescue during the past seven years.

“It’s nothing for me to have 20 rescue dogs at a time,” said Outlaw, who receives telephone calls from people asking for help with stray dogs. “Everybody trusts me. I have never sent one to a shelter and I never will.”

She travels often, taking dogs to meet volunteers who then transport the dogs to different animal rescues.

“It keeps me so busy doing these transports,” said Outlaw, who said it’s hard to find people to transport animals to rescues and take care of animals until they are adopted.

Two weeks ago, Outlaw took a load of puppies to London on a Saturday morning. On January 29, Outlaw took in seven puppies and made arrangements for those puppies to be placed at a rescue.

“My heart is broken every day over these animals,” she said.

Outlaw began helping dogs in 2008 when she would stop on her way to work in Cumberland and feed stray dogs on Pine Mountain.

“ It got so bad that I wanted to start a humane society,” said Outlaw, who created the Pawz and Clawz Humane Society.

“It’s worse now that it has ever been,” said Outlaw. “The economy is so bad right now. Everybody wants a puppy for Christmas.”

“I get so overwhelmed sometimes that I don’t know what I’m going to do,” said Outlaw. “If I had a building, I could do so much more.”

During a blizzard last February, Outlaw took care of 42 dogs.

“They were all going out on rescues, “said Outlaw. “It was that weather.”

When Outlaw is in need of supplies, she asks for blankets, dog food, cedar chips and other items on her Facebook page. People sometimes leave dog food on her porch or give donations to help with veterinarian bills.

“You wouldn’t believe how many people support what I do,” said Outlaw.

With the help of Eolia resident June Maggard, Outlaw still sees that stray dogs on Pine Mountain are fed with dog food donated by Walmart.

On February 20, she is planning to take a number of dogs to Mt. Sterling to be spayed or neutered.

“What we need are more spay and neuter clinics,” she said.

Outlaw said she is going to be a voice for neglected and mistreated animals on February 23 when she lobbies in Frankfort.

Persons interested in helping Outlaw’s efforts may donate funds online through Outlaw’s Go Fund Me account at www.gofundme.com/pwaa7vs8. You may also mail donations to Outlaw at P.O. Box 528, Whitesburg, KY 41858.