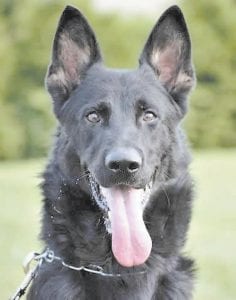 Natz will be on duty in Whitesburg soon.

“The animal will actually be designated as a police officer,” said Whitesburg Mayor James W. Craft, who added that the dog will have a police badge on its harness. If someone harms the dog, the person will be charged with the crime.

Day will undergo three weeks of training in May at the K9 Working Dogs International, LLC in Longford, Kan. At the end of May, Day will drive about 15 hours from Kansas with Natz by his side.

A trainer told Day the dog should not be petted or exposed to people much for the first three months he is in Letcher County. Natz is trained to detect narcotics, and to track and patrol.

“It will be a valuable asset to the law enforcement community here in Whitesburg and Letcher County to help stem the flow of illegal drugs,” said Craft. “It’s also something that can be used in and around the schools to detect any illegal drug activity there, which will be a big help.”

Day said if hikers get lost again on Pine Mountain the police dog will assist in search efforts. He said he will continue to train Natz each week foras long as the dog is in good health and able to remain a police dog.

The dog can only accompany Day on patrols because other officers will have not gone through the necessary training.

“Whenever you see me, you’ll see the dog,” said Day.

“It’s another tool,” said Banks, who suggested the dog also be trained to detect explosives.

“I would feel a lot safer if we had a certified K9 who could detect if a building is safe,” said Banks.

Day said he has wanted a police dog for quite awhile, but became proactive after his police cruiser was one of two hit during a highspeed chase in January. The driver fled and Day said police waited at least two hours for Kentucky State to arrive with the only trained search dog in the Post 13 counties of Letcher, Knott, Leslie, Perry and Breathitt.

“He was already gone,” said Day. “If we had a dog, we probably could have gotten him that night.”

The last police officer in Letcher County to patrol with a dog was former Fleming-Neon Police Officer Jeff Sparks.

The cost of acquiring Natz, the dog’s training and Day’s training is about $18,000. Day has obtained $10,500 in grants and raised about $3,000. The City of Whitesburg will contribute, Day said. Walmart has agreed to donate a $25 gift card each month to help pay for dog food.