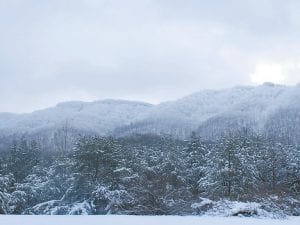 Far from the ‘rabbit tracker’ snowfall columnist Ike Adams writes about this week, Pine Mountain in Letcher County was covered with a significant amount of snow this week, as is seen in this photo taken Monday at Cram Creek at Mayking. (Photo by Becky Johnson)

A “rabbit tracker” is what Bill Mardis in Somerset would call this little skiff of snow that had The Browns’ bottom oh-so gently blanketed at dawn this morning as well as nearly smothering all the pastures in our little valley.

The sort of snowfall that you only get to see if you get up at the crack of dawn to go fetch the morning paper and notice that the lawn is white and slick. Because, as soon as the sun comes up, the snow will turn to water, almost in a heartbeat, and then the magic will disappear and be gone forever unless you save it to your memory.

Mardis is a fellow winter weather prognosticator and he bases his snowfall prediction on the number of foggy mornings in August. Obviously, since Somerset is so close to Lake Cumberland, almost every morning of the year is apt to be foggy but Bill has scouts out checking to be sure.

And for every foggy morning reported in the month of August, we are supposed to get a rabbit tracking snow. And, for sure, the one on my lawn this morning qualified because the tracks were there, aplenty by the bowl where I put out the dog food. If rabbits can’t have lettuce in the morning, they will gladly sample whatever variety of dog nourishment that Purina has on sale.

And my dogs sit by in wonder that something else will eat it. If I found my Labrador curled up with five rabbits, I would not be the least bit surprised. I’m sure that he has told them that I don’t feed him that well either. Not that my dogs are not well fed. In fact, they are too fat, but they like to commiserate with the possums, coons and rabbits with whom they share the chow . They will cautiously watch a dangerous squirrel scamper across the yard, but pay no attention to a deer and they are fond of trying to howl louder than the coyotes in the wee hours of the night.

I call them watchdogs. They will watch you come on the place and steal everything I own and actually lead you to where I have my good stuff hidden. They also watch for the lady in the UPS truck because she carries doggy treats there on the dashboard. If a UPS truck goes by up on the main road about half a mile away, my dogs will start barking. They are apparently jealous that somebody else is going to get a treat. My Lab will actually get up in the truck while I am signing for a package and he will sit there on the passenger side where a seat ought to be and roll his eyes as if to suggest that he would be glad to spend the rest of the day with the driver because he knows all the local addresses she might need to visit. And I promise you faithfully that he would ride off with her if she didn’t reach for the pepper spray that comes in handy when a milkbone doesn’t work.

She is such a beautiful woman, but she tells me that she wishes the men on her route paid as much attention to her as the dogs do. And I tell her that I order stuff that I know will have to have UPS delivery just because I like to watch her come around.

And she says, “Yeah, but you don’t bite and don’t look like you ever would and I don’t believe you want a milkbone and you are not nearly furry enough for me to pet on.”

In the meantime, the snow is still falling and the delivery folks have been out here in this cold (18 degree and snowy) weather and I don’t envy them their jobs. But I do admire their dedication, as do my dogs.

And if the UPS lady offered me a milkbone, I’d probably try to eat it.