Dogs were hunting when trooper shot them, owner says 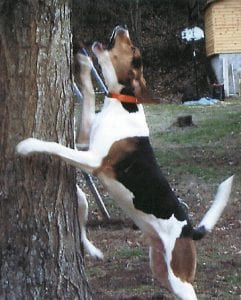 A Kentucky State Police trooper shot and killed two hunting dogs after their loud barking disturbed his sleep, the owner of the dogs has charged. 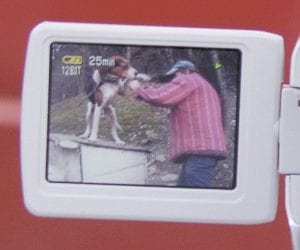 Arnold Coleman, of Virgie in neighboring Pike County, said the trooper "admitted doing it" after a dog tracking system led Coleman and his teen-aged daughter to a location near the trooper’s home in the Grassy Fork section of Hemphill.

"He said he shot them at four in the morning and then went on to sleep," Coleman told The Mountain Eagle this week. "If I had made a mess like that I don’t believe I could sleep." 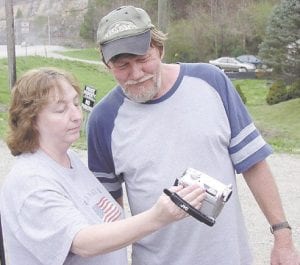 "They’re looking to bring charges against Trooper Hall," Bolling said. "I encouraged them to wait and let (state police investigators) do their work."

Coleman said the two Treeing Walker coonhounds, a five-year-old male named Hawk and an 18-monthold female named Star, were killed early on the morning of March 29 after a raccoon’s scent led them across Boone Mountain, at the head of Long Fork in Pike County, and down into Hemphill. Both dogs were shot in the left side – Hawk once and Star twice.

"Treeing Walkers are one of six breeds of coonhounds developed in America to trail and tree raccoons, then to stay at the tree to alert hunters with their loud and distinctive bay.

"I believe that dog (Hawk) was still with his feet on the tree when he was shot," Coleman said while viewing photos of the remains of the dogs. "She (Star) was running from him."

Hall, a veteran trooper, could not be reached for comment. A source familiar with the incident said Hall shot the dogs after they "tried to eat him up" when Hall walked from his home to find out what they had been barking at "for more than two hours."

"He didn’t just go up there and shoot them point blank," the source said. "He was trying to round them up, and when he got hold of their radio collars they both snapped at him and just started trying to eat him up."

Coleman, who works as a contract lineman for AT&T, said he last saw the dogs alive just after dark on March 28 when he drove them to Boone Mountain to "get out of everybody’s way and turn them loose" for a training hunt. He said he lost contact with the animals, both of which were wearing tracking collars, about 2:30 a.m. on March 29 and began trying to locate them.

"I wasn’t looking at the time, because I was enjoying coon hunting," he said. "Most of the time those dogs will come back to where you set them loose."

Coleman said that after Hawk and Star failed to return to the place where he released them, he drove on up Boone Mountain and took a right turn but was unable to locate the dogs. Coleman said he gave up the search at 7 a.m., after becoming afraid his truck was going to run out of gas. He said he then went home to take a nap, hoping that in the meantime someone would call him to report the whereabouts of the dogs.

"When you lose a dog, somebody usually calls you," Coleman said, adding that the animals were also wearing separate collars with nameplates bearing his contact information.

Coleman said he woke up from his nap at noon and, with 17-year-old daughter Amber riding with him, returned to Boone Mountain, this time turning left and heading over into Letcher County. He said he didn’t travel very far before his dog tracking receiver began to pick up a strong signal. Coleman said that when he stopped his truck to begin calling for the dogs he was approached by Hall, who told him the dogs were dead and that he had shot them.

Coleman said Hall then gave him a plastic bag containing five collars that had been removed from the dogs and began chastising him for permitting the dogs to be in the area around his home.

"Every word he said to me was smart. He showed no remorse," Coleman said. "If he had just apologized to my little girl that would have meant the world to me."

Coleman and his wife, Debbie, say that in addition to being valuable coonhounds, the two dogs were also family pets. To demonstrate, they played a video made by Amber which shows the dog exchanging "punches" with the elder Coleman.

"I told him (Hall) he didn’t only kill one of the best coon dogs in this area, he also killed a pet and a family member," the elder Coleman said.

Coleman said that when he met with supervisors at KSP Post 13 in Hazard they apologized about the shooting, but said no action could be taken against Hall because the dogs were behaving in a manner which violated the state’s leash law.

"I told them I wasn’t trying to be a smart-aleck, but why did the state send me a hunting license if I couldn’t turn my dogs loose," Coleman said.

Kentucky state law (KRS 258.265) gives police officers the right "to seize or destroy" any dog found running at large at night unless it is "a hound or hunting dog which has become temporarily lost from a pack or wandered from immediate control of its owner." The law says a hunting dog can be killed by police or an animal control officer if it is "found in the act of pursuing or wounding livestock, or wounding or killing poultry, or attacking human beings."

Coleman said that soon after he returned to his home after visiting with Bolling he was contacted by the state police post in Hazard and asked to file a written complaint against Hall. After Coleman did as requested, the complaint was forwarded to state police headquarters in Frankfort.

"It’s an ongoing investigation," said Sgt. Travis Tennille, a state police public affairs officer in Frankfort said Tuesday afternoon. "I have no idea how long it’s going to take to conclude the investigation."

The source familiar with Hall’s role in the incident described the trooper as "an avid sportsman" who supports coon hunting and has always obeyed Kentucky’s hunting laws.

Meanwhile, officials with the American Kennel Club (AKC) and the Kentucky Houndsmen Association have offered their assistance to Coleman.

"The community of coon hunters in Kentucky is extensive and at the present is greatly disturbed by this situation in which a public servant responsible for protecting the property of the citizens of Kentucky is charged with what, if proven to be true, is a wanton act involving the death of two prized animals," Stephen F. Fielder, the vice president for the AKC’s coonhound events department, wrote in a letter to Bolling that now appears on the organization’s web site. "These animals were not only the private property of a Kentucky citizen but also the cherished companions of him and his family."

Fielder’s letter adds that, "his charges indicate that the trooper not only killed the dogs for simply ‘keeping him awake’ but he also removed the electronic recovery collars from the dogs, hindering Mr. Coleman’s ability to recover his hounds in the mountainous terrain of this area of Kentucky."

"The coonhound community, through the Kentucky Houndsmen Association and the Coonhound Events Department of the American Kennel Club and its web site, www.akccoonhounds.org, is a very close-knit and proactive group and is watching this situation very closely," the letter says.