Doing the right thing pays off

She's a hero to many for taking stand about Hilton 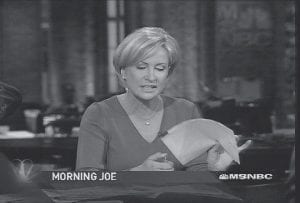 In this photo from video, released by MSNBC, the network’s Mika Brzezinski attempted to burn a news script about Paris Hilton getting out of jail, on the “Morning Joe” show on June 26. (AP Photo/MSNBC)

Brzezinski used both to destroy a script calling for her to read about Hilton’s release from jail on MSNBC’s “Morning Joe” program recently. Part serious, part an act, it has become an Internet sensation. More than two million people have watched a clip of the incident, around 10 times the number who watched it live on TV.

Apparently, she’s not the only one sick of the socialite.

“Among journalists it touched a nerve because I think we’re tired of pretending this is important,” she said. “We also know that, deep down inside, our viewers know that we don’t believe this is news. They can’t. They can’t think we’re that dumb.”

Brzezinski, who left CBS News last year, has been working as a news-reader and on-air foil for Joe Scarborough on the show MSNBC is trying out to replace Don Imus in the morning.

It was then Brzezinski’s turn to sum up the day’s news. She looked down at her script and Hilton was the top story. She froze.

“I could not get through the first three words without crumbling,” she said. “My skin was crawling. This was our lead? On a day like this? To me, it was just the ultimate Paris Hilton out-of-control moment. We’ve gone too far and we’ve got to stop. That was all real. There was nothing planned about that, and I believe we got a little snappy.”

Indeed, Scarborough egged her on. He took the wadded-up script and drew it to his nose, inhaling with a look of rapture on his face. “Smell that,” he said. “It even smells good.”

Broader show-biz antics took over during subsequent news breaks. Brzezinski attempted to set the script ablaze at one point, then sent it through a shredder borrowed from network chief Dan Abram’s office.

She attracted the world’s attention. Brzezinski’s gotten over a thousand e-mails, and was named “woman of the week” by a British Web site. She’s been invited to address a media symposium in Scotland. The New Zealand Herald hailed her: “Deliberate or not, there is no denying the incident struck a chord with viewers the world over. When it comes to Paris, we’ve all had enough.”

It may be a coincidence, but three days after the incident MSNBC told Brzezinski that she’ll have a regular hour to anchor the news each morning.

There’s been no shortage of journalists making clear their distaste for the story, only to find Hilton’s siren song irresistible.

CBS’s Katie Couric told a Boston audience in May, to applause, that “we have a precious amount of time on the ‘CBS Evening News’ and I don’t think we need to ever utter the name Paris Hilton.” A month later, Couric’s broadcast reported on Hilton’s jailing and the controversy over her shortlived release.

NBC’s Brian Williams noted on his Web log when Hilton was taken into custody that “nobody mentioned Paris Hilton at our afternoon editorial meeting.” The very next day, Hilton’s brief release was the No. 2 story on NBC’s “Nightly News.”

Anderson Cooper couldn’t help himself when his CNN newscast immediately followed Larry King’s exclusive interview with Hilton on June 27. King landed the interview only after ABC and NBC backed off their hot pursuit, skittish about publicity that they were, it appeared, willing to pay for her cooperation.

“I think we have heard a couple of you screaming at the screens,” Cooper said.

He then proceeded to spend an hour talking about Hilton. And he was amply rewarded: Cooper’s 1.89 million viewers that evening more than doubled his average June audience of 790,000 people, according to Nielsen Media Research. King nearly tripled his typical audience that night.

The Associated Press tried a voluntary ban on Hilton news earlier this year, just to see who would notice. It ended when she was ticketed for driving with a suspended license, the offense that eventually landed her behind bars.

Television ratings aren’t the only proof that reporting on Hilton is like eating junk food – you know it’s bad for you, but you do it anyway.

News Web sites can track exactly how many people click on certain articles. On the Web site AP provides to its members, the Hilton story is the fourth most clicked-upon one of the year, after the Iraq war, the death of Anna Nicole Smith and the Virginia Tech shootings.

Hilton’s special treatment by authorities in a celebrity-obsessed city was a legitimate news story, she said.

What she wore or ate in prison? Not so much.

Brzezinski, daughter of Carter administration national security adviser Zbigniew Brzezinski, said that after her initial annoyance on the morning of Hilton’s release, she and Scarborough were really just mocking themselves.

But if that makes people think about Hilton coverage, so much the better, she said.

“It’s not like I’ll never cover a Paris Hilton story again and it’s not like I’m never going to listen to my producer again,” she said. “But that day, that story as the lead was just preposterous. It made me feel stupid.”