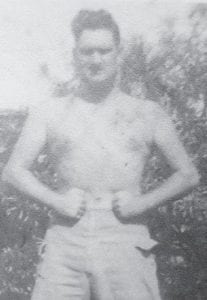 Everett Vanover says he was “acting up” in this photograph taken at Hickam Air Base, Hawaii.

Early in 1950, I had orders to Hickam Air Base, Hawaii. I had quarters for my family and was in charge of the base printing department.

The Pentagon wanted me to keep an eye on some workers who were sent to Hickam Field to clean up a mess left there from the raid from Japan in 1941 that never got cleaned up at that time. I did as I was told.

After the raid, Pearl Harbor was later cleaned up. The air base got very little cleaning.

The workers were very nice to me. The young man in charged kept me up to date on all work, and I would report back to the Pentagon. If he needed anything, I got it for him.

On slow days at my office, I would go by their work to see if they needed anything, and would help them out on some of their jobs. e

Th photo I am sending was taken by one of the workers when I was acting up, and has been with me all these years.

The job was done in about 45 days.