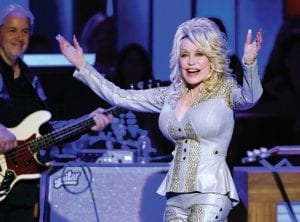 Dolly Parton performs at her 50th Opry Member Anniversary at the Grand Ole Opry in Nashville on Oct. 12. The 73-year-old actress, singer and songwriter, who first played the Opry when she was just a teenager, celebrated her 50th anniversary as a Grand Ole Opry member over the weekend. (Larry Mc- Cormack/The Tennessean via AP)

Country superstar Dolly Parton is still working “9 to 5,” and doing what she loves as she celebrated her 50th anniversary as a Grand Ole Opry member.

The 73-year-old actress, singer and songwriter, who first played the Opry when she was just a teenager, played the longstanding radio show this past Saturday night in Nashville, Tennessee, in front of sold-out crowds. Hank Williams Jr., Lady Antebellum and Toby Keith performed in her honor as well and her show capped off a week of Dolly-themed performances and events at the Opry.

She joked to reporters before her performance that when the Opry approached her about the anniversary, she told them, “I don’t want people to think I’m 50 years old.”

The anniversary reminded her of the first time she got to perform at the Opry.

“Well a lot of people think this is my 50th year on the Grand Ole Opry,” Parton said. “It’s actually been 60 because first time I got to sing on the Opry I was 13 years old. And actually Johnny Cash introduced me, I believe. And Jimmy C. Newman had given me his spot.”

Parton said she was grateful to still be chasing her dreams and said she’s got more film, TV and music projects on the way. The Opry performances will be aired on an NBC special on Nov. 26 and Netflix will air an anthology series based on her songs in 2019.

“I’m just very honored that I’m still around, not only to just get to accept this, that I can actually perform and get out there and still doing what I love to do,” Parton said. “And maybe I’ll be around another 50 years, who knows. If I’m lucky.”