Donations for good cause 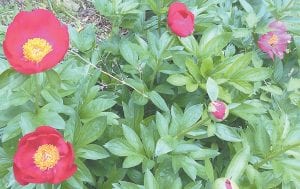 Peonies are blooming in Letcher County this week.

Okay, it seems that I have caused some confusion.

Well, actually, not a day goes by that I fail to cause some confusion, but this particular incident is a tad aggravating because it happened here in the column about a month ago when our family started its annual campaign to help raise funds to fight diabetes.

As you longtime readers of POINTS EAST know, Loretta and I, along with half a dozen other members of our family, have been participating in the central Kentucky Step Out Walk To Stop Diabetes over the last half dozen years. I use the space your family newspaper allots this column around this time every year to try to talk readers into making cash donations to, in effect, “sponsor” us in the Lexington walk that takes place annually at Keeneland around the end of May.

Step Out Walks will also be going on at every major municipality in the country at the same time and they comprise the American Diabetes Association’s (ADA) principal fund-raising drive for the entire year. The net effect is that millions of walkers across the country will generate tens of millions of dollars to help fight this horrible disease. The Keeneland walk alone will draw in over 2,000 walkers and aims to generate about $250,000.

Our family team is named for our grandson, eight-year-old Tyler Kane Ochs, who deals with type 1 diabetes every day of his very active life. Tyler was early on getting at least three insulin shots every day and doing a minimum of six daily blood tests. Now, thanks to research largely paid for by ADA, he wears an insulin pump attached to his belly, and only has to deal with a large needle one time every couple of days. If you don’t believe there’s much difference between getting stuck with a needle one time as opposed to six, just ask our Tyler about it and you’ll get an earful.

Anyway, we call ourselves Team TKO and for the last few years we have been the top fund-raising family team at the central Kentucky walk. Team TKO usually hits about $5,000 each year, well over half of which comes from readers of this column. However, if things don’t pick up speed in a hurry, that ain’t gonna happen this year. At this writing, our total stands at $649. In other words, we’ve a long way to go to maintain bragging rights.

And that’s really all it is, bragging rights, I mean. In reality it does not matter whether Team TKO is in first or last place in the overall scheme of things as long as we put forth our best effort to help find a cure for this disease that puts such a heavy burden on kids like Tyler and causes untold suffering among adults. Diabetes is, by far, the leading cause for foot and leg amputations among adults and also, by far, the leading cause of blindness and internal organ failure.

We have done our homework to the point that we know, with certainty, that supporting ADA is the most efficient use of our time and money when it comes to participating in the battle against the disease.

As to the confusion I caused, you may recall that I advised potential donors to go to the Stepout Diabetes.com website and click on donate to a walker. Three individuals interpreted that to mean that their money would go directly to me, personally, as opposed to ADA. They went ahead and made donations to the general fund, which means that I don’t get credit for raising the money, nor does Team TKO. As far as I’m concerned, that’s better than not making a donation at all, but, again, the reality is that if you donate to a walker, ADA still gets the donation and we simply get credit for talking you into making it.

I believe it’s easier, however more confusing it may be, to use the website. Hey, you can even join Team TKO on the site and we would love to have you accompany us on the walk. You are welcome to join the team even if you don’t feel up to walking with us at 9 a.m. at Keeneland on June 4.

But, if you’d rather eliminate the confusion and make a paper donation, you can make a check payable to American Diabetes Association and mail it to my home address. Be sure to put Team TKO on the memo line. Tyler and I will take it with us to the Step Out Walk.