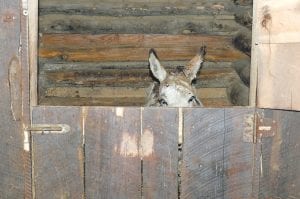 The miniature donkey pictured above disrupted traffic along the Whitesburg Bypass twice on Monday before officials with the Letcher County Sheriff ’s Department caught the jack and brought him to a barn for safekeeping. The owner of the jack has ten days to claim the animal before he is given away.

A male donkey was captured uninjured after disrupting traffic twice on the Whitesburg Bypass Monday. Police are now looking for the animal’s owner.

Authorities received their first complaint of a jack on the loose at Caudilltown around 8 a.m. on Monday. Soon after, the donkey was spotted in the Food City parking lot and then nearby in the Mountain Comprehensive Health Corporation parking lot. The pale white and gray jack then made his way onto the bypass.

“He was right in the middle of the slow lane,” said Whitesburg Police Officer Brandon Fields, who was able to guide the jack, who is estimated to be about two years old, down the exit loop which leads to downtown Whitesburg.

Fields tried to get the animal to go to Michigan Avenue (formerly Cow Hollow) into a residential area, but the jack instead went around the police cruiser and up the concrete steps near Mountain Heritage Village to Easy Street, also known as Town Hill or Cowan Hill. The jack then walked around the old School Hill neighborhood through yards at Harris Loop before finding a dirt road which led back to Town Hill and on toward Little Cowan. 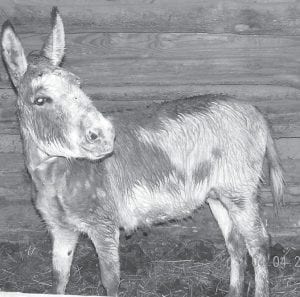 Letcher County Sheriff ’s Dept. Lt. LaShawna Frazier used a horse to help coax this male donkey to safety after it had been running loose around Whitesburg.

Police again began receiving complaints around 1 p.m. on Monday when the jack was again seen on the bypass. The animal was headed south on a bridge near the Whitesburg hospital when an 18-wheeler drove slowly onto the bridge and scared the animal when its weight caused the bridge to shake.

Fields explains what happened from there: “It just freezes and tries to retreat and I try to box it in. It goes in the middle of the road and stops. Both lanes of traffic stop. I blow my horn and got it to start moving toward Pizza Hut.”

The jack then ventured to the right across from the entrance to Circle Drive (near the Letcher Manor Nursing Home) and headed up a hill toward Briar Cliff, where it remained until Lt. LaShawna Frazier, equine investigator with the Letcher County Sheriff ’s Department, was able to use a horse to coax the jack into captivity during heavy rains around 6:42 p.m.

“He was scared to death where he had been chased so much with cars and people,” said Frazier.

The animal is being kept in a safe location. The owner of the jack has 10 days to claim the animal by calling 633- 2293 or he will be given away.

Fields said the donkey isn’t the first unusual animal police have had to chase through Whitesburg, noting past incidents with bears, goats and even an emu.

“An emu got loose one time and they had to chase it all over the place,” said Fields.