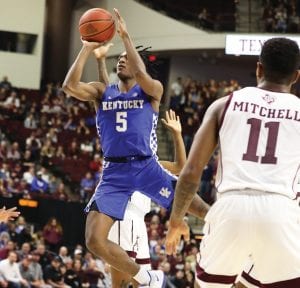 Immanuel Quickley’s character could make an impact with NBA teams in the coming draft along with what he did on the court at UK last season. (Vicky Graff Photo)

If you look at most mock drafts, former Kentucky guard Immanuel Quickley is projected to go near the very end of the two-round NBA draft whenever it ends up being held. However, mock drafts are not always right.

“I think there are actually some NBA teams that would happily draft Immanuel Quickley over Tyrese Maxey,” one college basketball/ NBA writer told me.

Most mock drafts have Maxey, who had a terrific freshman year at UK, as a lottery pick.

“Maxey on paper is a potential lottery pick and I know some mock drafts have Immanuel going almost last in the second round,” the writer said. “But are those people talking to the same NBA teams I am? I don’t think so.

“Immanuel Quickley will not last that long in the draft. I know some teams are worried about his size but I think Steph Curry (of the Golden State Warriors) is the poster boy of an undersized guard at the next level. Same with Trae Young (of the Atlanta Hawks).

“Quickley was a point guard in high school. He’s a great shooter and more than adequate defender. He was SEC Player of the Year. I just know teams I talk to seem a lot more interested in him than what the mock drafts are projecting.”

One of Quickley’s biggest intangibles is his character. He prides himself on his Christian faith and Calipari talked often last season about the example he set for others to follow.

I asked Rivals.com and Yahoo.com basketball writer Krysten Peek about the value of a player’s character in draft decisions.

“I think character is big for a lot of teams. They want a guy who is good in the locker room. That’s especially big this year when they are not going to see and talk to players at the (draft) combine. It’s just going to be one on one virtual conferences,” she said. “Someone like Quickley who has high character, that’s going to be noticed by teams because it’s obvious he’s not only a good player but really a high character player you want in your locker room.”

“Him and coach Cal are super close. He talks about Cal all the time. Coach Calipari does an amazing job sticking with his roots. He calls my grandpa every so often and my grandpa really appreciates that,” Isaac DeGregorio said.

“Grandpa has a national title ring from 2012 and he gifted me that ring. I keep it in my dresser drawer in a case.”

Will he bring it to Lexington with him?

“If it fit me, I might wear it but it is way too valuable for me to lose,” Isaac DeGregorio said. “It might make it to Lexington with me but I am not quite sure yet.”

The UK walk-on is not quite sure the first time he met Calipari but has been around him often. He thinks the first time might have been when his dad was coaching high school basketball and Calipari came to watch one of his players and he just happened to be at the same practice.

His older brother went to Kentucky and DeGregorio went to several UK practices with his grandfather when they came to visit his brother.

“After my brother’s graduation (ceremony), we went to a practice and then Cal’s house,” Isaac DeGregorio said. “I have been to like three or four practices, so I am pretty familiar with how he coaches and what he expects.”

He averaged a team-high 17.3 points per game for North Catholic (Pa.) and helped his team go 26- 2, including winning the WPIAL Class 3A championship. He also made over 300 3-pointers in his prep career.

“I shoot the ball well and like to get teammates involved,” Isaac DeGregorio said. “I am a pass-first point guard. I can shoot the 3 and get to the hoop, but my team had four players average in double figures. I like to get the ball to other guys to score.”

He admits Kentucky has always been his “dream school” because of his connections to Calipari. He also wants to be a coach — his uncle is also a high school basketball coach — and knows there’s no better “opportunity” to learn than to be with Calipari at UK for four years or longer.

“I am realistic about my playing situation but I am still going to work my butt off and try to get playing time,” DeGregorio said. “I am not a five-year, four-star or even a three-star player. But if I work maybe by my senior year I will get a couple of minutes. If not, I will still keep it real because I want to be a coach and there’s no where else I would rather be than learning from coach Calipari.”

He’s shown he can handle and overcome adversity. He missed part of his sophomore season after undergoing heart surgery and spending four days, including two in intensive care, in the hospital. He got back on the court about a month later despite not being 100 percent because he wanted to help his team.

He’s not been to the same high-profile camps that his future UK teammates regularly attend but he does know a little about two of them.

“I don’t know any of them personally but I have played against a couple of them in camps or been at the same camps,” he said. “Brandon Boston is a player I remember from a camp where I was on a team with him. He’s really good. Lance Ware, I know about him from camp. Both are really good players and I am sure all the other new guys are as well.”

His family carefully went over his college options with him knowing he had other choices where he could go and get to play more basketball.

“They let me make my own decision. I thought about it a long time, and once I made my decision, everyone was really happy for me,” he said. “They knew Kentucky was my dream school and obviously my grandpa was really happy because of the way he is with coach Cal. I just hope he doesn’t worry Cal too much the next four years asking about me all the time.”

Askew reclassified from the 2021 recruiting class to the 2020 class, an option that Harmon also has expressed interest in but has not done yet.

“I used to play with him on the Oakland Soldiers (in AAU) in fourth grade, so I have known him for a while,” Harmon said. “He is a good person, good kid. He works hard and it shows.”

Harmon also shared something about Askew, a five-star player, that I had not heard before.

“I respect his mentality the most because when he was younger he was low rated and some people said he was too slow to be a big-time player,” Harmon said. “There are a lot of things that you can tell he has really worked on over the years to make sure those people were not right about him. He has earned where he is at right now. I have a lot of respect for him because of the way he plays but also the way he works.”

So what does Askew do best that Kentucky fans should expect to see next season?

“The best thing he does on the court is that he can shoot it really well. He is just a solid point guard and good player. He should be a really good player at Kentucky that the fans will really like,” Harmon said.

With Nick Richards and EJ Montgomery both headed to the NBA, Kentucky certainly could benefit if 7-3 Purdue transfer Matt Haarms picked UK over the 30 plus scholarship offers he has.

Mike DeCourcy, Big Ten Network studio analyst and Sporting News columnist, describes Haarms as a “excellent defender and game-changer at times” because of his size and timing. He has over 200 career blocked shots.

“I think he would definitely be an asset for the Wildcats if he were to choose UK,” DeCourcy said. “He is not a great post scorer, but he has very good hands and can hit consistently from 10-12 feet. He has made 3’s on occasion.” Adding Haarms could force UK coach John Calipari to make some “adjustments” to the way the Cats play because incoming freshmen Terrence Clarke and BJ Boston should be at their best with the floor spread. Haarms would also have to improve his ability to make plays after setting screens on the pick and roll.

“Offensively he could probably just play the dunker position because with a guy his size, they could just throw up lobs to him,” one college basketball analyst said. “Defensively Kentucky wants to pressure the ball, get in passing lanes and could funnel guys to him to block shots.”

DeCourcy believes Haarms would be more of an “energy guy” than team leader because despite his demonstrative play on the court, he’s not an outspoken player.

“I think he would be an enormous fan favorite. He plays with a lot of personality. He is very invested in his team,” DeCourcy said. “That’s one reason people were so surprised to see him transfer. He just seemed to love Purdue so much.”

One Big Ten writer told me Haarms’s personality is not exactly what always fits best at UK.

“He does not like a lot of media coverage. He doesn’t like the fish bowl atmosphere and just imagine the media coverage at Kentucky he would face,” the writer said. “Thats what would make him kind of an odd fit for Kentucky.”

Haarms had not set a firm decision date by Sunday night but had let some teams – Kentucky was not one of them – know they were no longer on his list.

Quote of the Week: “It would probably be the funny stories about Calipari that my son would tell me. And trust me, there were some really funny moments,” Denyse Maxey on what she will remember most about Tyrese Maxey’s one season at UK.

Quote of the Week 2: “We sometimes go for a run to keep us busy and give us something to do. We are doing some social media things with the Kentucky Children’s Hospital and with fans, too. But football-wise there is just not much you can do,” All-American punter Max Duffy on how him and UK offensive guard Luke Fortner are spending their time.