Don’t fall for their ‘uniforms’

The Victorian era gave birth to a very unpleasant custom called slumming. Parties of swells in London and New York would descend on impoverished neighborhoods as a form of entertainment. In addition to breaking up the tedium of their posh lives, the adventure made them feel superior.

A much updated version of slumming has been taking place in Manhattan, where Facebook is arranging its initial public offering. This time, though, it’s the superrich visitor, Facebook founder Mark Zuckerberg, who is dressed in rags — his trademark T-shirt and hoodie. The Wall Street investors currying his favor are the ones in expensive business suits. 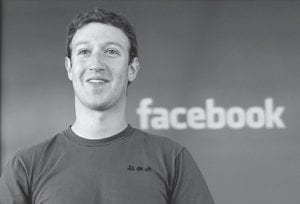 Facebook CEO Mark Zuckerberg turned 28 on May 14. Zuckerberg’s wealth is based on people’s “willingness to surrender their privacy and friends’ names to Facebook,” writes columnist Froma Harrop. (AP)

Less appetizing is the con perpetrated on Facebook users. The entire wealth of the enterprise is based on the munchkins’ willingness to surrender their privacy and friends’ names to Facebook — data to be packaged a thousand ways and sold to the highest bidder. To use the users, Zuckerberg must get them to trust him, hence the after-school sweats.

Elsewhere on Facebook’s upper deck, another founder, Eduardo Saverin, has just renounced his American citizenship, a mere 14 years after the Brazil native obtained it. Saverin denies that he became a citizen of Singapore to avoid the American taxes he’d surely pay after the spectacular stock offering. Funny how no one believes him.

From the annals of ingratitude: Under a kidnapping threat, Saverin’s wealthy family left Brazil for the safety of Miami. Eduardo later attended Harvard. There he met Zuckerberg. Together they created Facebook and grew the company in Menlo Park, Calif. The United States provided Saverin with police protection, schooling, contacts, the fertile tech soil of Silicon Valley and financial markets. Who has been paying for this stuff? The honchos who stay put, for sure, but mostly the 99 percent.

On the corporate level, tech giant Apple has apparently mastered the art of moving profits earned in the United States to foreign tax havens. The magic trick works best in the digital economy, where the source of wealth — royalties, intellectual property, and downloaded songs and software — can’t so easily be pinned to any earthbound set of coordinates. It’s much harder to hide the money when your products are tractors or cardboard boxes, or you sell things out of buildings.

Thus, Wal-Mart last year paid taxes at a rate of 24 percent on its worldwide profits. Apple was taxed at a rate of 9.8 percent. Had Apple not routed the dough through certain foreign addresses, its check to the IRS last year would have been $2.4 billion higher than it was, according to economist Martin A. Sullivan, formerly of the Treasury Department. Nonetheless, Apple’s late founder, Steve Jobs, dressed in his trademark jeans and black turtleneck, would complain bitterly about the taxes his company paid.

America educates the mathematicians, engineers and other workers who make these tech successes possible. It guards their glassy corporate facilities and their 7,000-square-foot homes. And the minute some foreigner tries to steal their intellectual property, the companies call on the expensive apparatus in Washington to stop it.

Be prepared for more Silicon slumming by zillionaires in their sweats. They are just happy-golucky peasants like the rest of us, so we have to be on their side, right? Wrong.