Dontaie Allen has ‘given us hope’ with UK 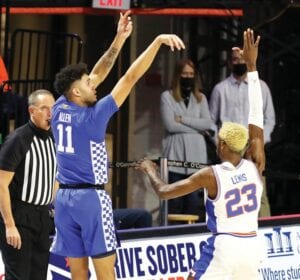 Dontaie Allen has given Kentucky fans hope for this season with his play in recent games. (Vicky Graff Photo)

Recently Kentucky coach John Calipari tried to compare the emergence of Dontaie Allen to former UK stars Shai Gilgeous- Alexander and Immanuel Quickley because they both did not emerge as standout players until the middle of the season.

However, the comparison is not quite the same. Gilgeous- Alexander started just two of UK’s first 15 games his freshman season before becoming the starting point guard, earned SEC Tournament MVP honors and being picked 11th in the 2018 NBA Draft.

Quickley also started just five of UK’s first 15 games last year. But like Gilgeous-Alexander, he played in every game he did not start. Plus he had played extensively as a freshman. Quickley blossomed into the SEC Player of the Year and became the 25th pick in the NBA draft a few months ago.

Calipari cited the patience both Quickley and Gilgeous-Alexander had before they became stars. Allen could not play last year due to injuries but played just 20 minutes in UK’s first seven games before getting 23 points at Mississippi State, 14 against Vanderbilt and six points against Florida. He’s 11-for- 16 from 3-point range in the three SEC wins.

“I think he has given us hope with this team,” Keaton Belcher, Allen’s high school coach at Pendleton County, said. “We don’t know what might happen the rest of the year. COVID could wipe it out. Games get bigger and more exciting.

“Dontaie has become a fan favorite not only in Kentucky, but nationally. What he has done has been super for the whole state, but especially Pendleton Countians.”

Belcher knows many questioned Allen’s ability because of the level of competition Pendleton County played. He didn’t have an elite national schedule like prep teams play.

“But our schedule was not bad. We played in Marshall County Hoopfest. We traveled a lot to play teams in different regions,” Belcher said. “Him scoring a lot in college is not surprising to me but it probably is to an average fan for him to do it at this level. But he can shoot. Always could and always will be able to do that.”

Allen is not going to blossom into a first-round draft pick this year like Gilgeous-Alexander and Quickley did, but he’s doing what he can to take advantage of his extended playing time.

“He’s much more well rebounded in the game of basketball than people think,” Belcher said. “I’m just glad people have been getting a chance to see that.”

He’s also intensely loyal. Teammate Brandon Boston was booed during UK’s win over Vanderbilt when he missed a shot.

“I don’t like that. That’s my teammate. That’s my brother. At the end of the day, I’m always going to have his back. I feel like everyone in BBN, everyone should be there for him and support him during this time because when he’s doing good, I think people are going to switch and they’re going to be supporting him,” Allen said. s

Kentucky defensive lineman Josh Paschal learned a lot from former All-American linebacker Josh Allen, a national defensive player of the year at UK before becoming a first-round draft pick of the Jacksonville Jaguars.

“He played the game with extreme passion. I remember the jump that he made from his junior year to his senior year was tremendous,” Paschal, who announced last week he would stay at UK for another season, said.

That jump in play made Allen a lot of money with his first NFL contract but Paschal said Allen’s success his senior season was no accident.

“You could really tell that it was going to happen just because of his work ethic and the way that he would work when we had workouts and not only during the workout, but the work that he’ll put in after as well,” Paschal, who played two years with Allen at UK, said.

“It was much more than just a game to Josh. You could tell that once he had (his son) Wes, he really turned things up. Everything that he has now is a byproduct of his hard work and him being appreciative of everything around him and what it took to get there.” s

Philadelphia felt like it got a steal in the NBA draft when Kentucky guard Tyrese Maxey fell to the 21st pick and the rookie has done nothing to disappoint the 76ers. He averaged 10.1 points, 2.2 rebounds and 18.6 minutes per game while shooting 49 percent from the field.

He really turned heads in his first start in game 10 against Denver. He went 18-for-33 from the field and scored 39 points in 44 minutes. He also added seven rebounds, six assists and two steals.

“He was great,” 76ers coach Doc Rivers said. “We needed him to be and we told him that before the game. He didn’t do it in a way where it looked like he was searching shots. He did it in a way where he ran the offense and got it in the flow. I’m really happy for him and not only just his scoring, he really didn’t turn the ball over, he had a great assist night, he had a great rebound night, he did a lot of things for us tonight.”

It was the highest-scoring game by a rookie this season and most points scored by a Philadelphia rookie since Allen Iverson got 40 in 1997. It was also the most points by a 76ers rookie in his first career start since 1970. Maxey became the youngest 76er at 20 years, 66 days to have a 35-point game and just the 14th NBA player to score 39 points at age 20 or younger while shooting 55 percent from the field.

That’s not all. Maxey became just the eighth NBA player with 35 points, five assists and five rebounds in one of his first 10 career games. The others are Frank Selvy, Oscar Robertson, Geoff Petrie, Alvan Adams, Tom Gugliotta, Iverson and Brandon Jennings. Only Maxey and Jennings have done it in the last 20 years.

The former UK star became just the fifth rookie to have 39 points, six or more assists and two or fewer turnovers. The other four are prominent names — LeBron James, Michael Jordan, Donovan Mitchell and Steph Curry.

Rivers did not think Maxey’s performance was a fluke

“I’m telling you, he’s going to be a terrific player,” Rivers said after the game. “He’s going to keep getting better. He’s gonna keep getting smarter by just playing with all these vets.” s

Several Kentucky basketball players have turned off their social media accounts this season because of fan criticism over UK’s 1-6 start. Freshman Brandon Boston was even booed in Rupp Arena and has had coach John Calipari publicly pleading for fans to support him.

What impact does negative social media have on recruiting? Do other schools use the passion of Kentucky fans when they are upset against UK in recruiting?

“It’s Kentucky. You come here because it is the highest level of college basketball. With everything there’s going to be the pros and cons. People will probably try and negatively recruit against us,” Kentucky assistant coach Jai Lucas said.

The newest UK assistant said Calipari and his staff recruit players who understand what they are walking into with the Cats.

“They understand what they’re coming into and the expectations and everything that comes along with it. It’s something that he does a great job of laying out in front of them,” Lucas said.