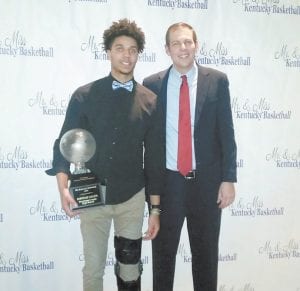 Now that he has been named Mr. Basketball, it won’t be long before Dontaie Allen will certainly see road signs coming into Pendleton County proclaiming it the home of the 2019 Mr. Basketball.

“That is just crazy to even think about,” said Allen after he won the award last week given to the state’s top senior player. “I really can’t even fathom that. It’s just nuts.”

Allen’s parents, coach Keaton Belcher and others erupted in applause, and maybe disbelief, when he won the award after playing in just 13 games as a senior before a knee injury sidelined him.

“I was really surprised, too. I am just grateful to be in this position and thank the Lord for it,” Allen, a Kentucky signee, said. “I think it just came down to people appreciating what I do on the floor. I can pass, dribble, shoot, rebound. I just know I am blessed to be in this position.

“There was a lot of pain not getting to play but there were also good things. I got to support my team. Now I am just ready for the next step.” 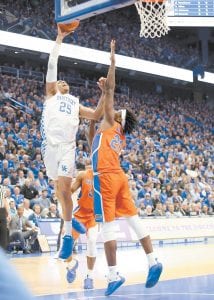 “I wasn’t expecting to win. I think people just appreciated the way I played,” Allen said.

Belcher knew some might be upset with Allen being named Mr. Basketball after missing the final two months of play. However, there is no set criteria on voting for the award and Belcher felt what Allen did for five years and also scheduling that let him play in 12 of the state’s 16 regions during his career helped him.

“I think we did a pretty good job of shopping him around the state,” Belcher said. “I don’t think any of the other (Mr. Basketball) candidates could say that they played across the state like he did. Us scheduling appropriately, him averaging 42 points a game. Those things were factors in the award along with him signing with Kentucky.” 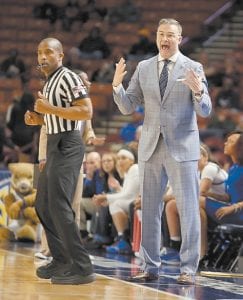 Belcher doesn’t have the social media followers that Kentucky coach John Calipari does, but he was very active on Twitter and other social media forums doing what he could to promote Allen. He even got Pendleton County superintendent Joe Buerkley to send a letter of support for Allen to voters across the state.

Now Allen is focused on his rehab before he gets to Kentucky. He’s been doing rehab three days a week in Lexington and hopes to be released soon to start doing more on the court.

“I am working on a lot of things and it is getting better. It is painful but I have to push through it and it will be good,” he said.

He’s got no plans to need a redshirt year at UK next season.

“I am not going into it trying to redshirt,” Allen said. “There is not really a timetable. Just see what happens. I want to play just like always next year. That’s the goal.”

Belcher, who played basketball at Belmont College, wouldn’t rule out Allen playing at UK as a freshman despite the injury.

“I think he is on pace to be in uniform next year at UK,” Belcher said. “That’s what he wants and he’s really working hard to do it. When Dontaie sets his mind on doing something, he really attacks it and that’s what he has been doing with his rehab.”

Mississippi coach Kermit Davis said it didn’t matter who his team put on PJ Washington when the Rebels played Kentucky because no one could match up with UK sophomore.

“We double teamed him at times, and he just caught it on the wide post, just making post moves,” Davis said.

Davis said he told his players to be prepared for what Washington would bring and to emulate what he did on the court. He’s the toughest one (in the SEC to defend). Grant

Williams (of Tennessee) is one, but PJ is a little harder because he’s a little taller,” Davis said.

“He sees the floor, and they get him on that same block all the time. He’s a very mature player who doesn’t try to do things he can’t do. He stays within himself.”

Washington admitted earning praise from a rival coach is special and shows he has become a leader for younger teammates.

“I’ve just gotta do that for these young guys so we can get in a better position to win games. It just kind of shows that the hard work is paying off a little bit. I got a lot more left I have to prove and we have to prove as a team,” Washington said.

Davis might have to scheme to defend Washington again. If the Rebels beat Alabama in the SEC Tournament Thursday, they will play Kentucky Friday night.

He’s hoping center Reid Travis is back for SEC and NCAA Tournament play. If not, he remains confident UK can still have a special postseason.

“Guys have definitely stepped up (with Travis out with a sprained knee). It’s just great for EJ (Montgomery) and Nick (Richards), obviously, to get some time and fill out their roles a little bit,” Washington said. “There’s definitely some good and bad, but we’re a good team without him and we’re a great team with him.”

Bud Dupree was the 22nd overall pick in the 2015 NFL draft by the Pittsburgh Steelers and brought some needed attention to the Kentucky football program when coach Mark Stoops was just starting his rebuilding effort.

“What Bud did a few years ago was good for the program but this year’s draft is going to be huge with Josh (Allen) and then what is going to occur after that. You are just going to keep seeing that Kentucky logo show up in the draft,” Kentucky recruiting coordinator Vince Marrow said looking ahead to the April draft.

Marrow says having a player picked in the top three to five like Allen, the consensus national defensive player of the year, is projected to be gives UK a “strong start” to the draft.

“Everybody is watching and seeing that. Players we are recruiting see that and remember that,” Marrow said.

The difference wi l l be that after Dupree was drafted the Cats had just one more player picked — Za’Darius Smith in the fourth round. This year Marrow knows a lot more Cats will be picked.

“I would not be shocked if we have 10 guys drafted. A lot of guys tell me that George (Asafo-Adjei) and Bunchy (Stallings) are going to be drafted,” Marrow said.

Tymere Dubose and receiver Dorian Baker, who had 55 catches in 2015 as a sophomore but just 27 combined in his junior and senior seasons.

“I don’t know what might happen with him, Tymere, Bunchy, George. But they all got a chance to be drafted. You are going to see our name (Kentucky) every day of the draft. That’s why having Josh go so high is big, but having all these other guys go after him just makes this whole draft bigger and hopefully the start of what we can do every year.”

Every year I have ever attended the state high school basketball tournament there has always been a couple of players I knew little, or nothing, about that impressed me a lot. This year was no different.

Start with 6-10 senior Dieonte Miles of Walton- Verona, an Xavier signee. In the quarterfinal loss to Campbell County, he had 12 blocked shots — and didn’t get a single block in the fourth quarter. He had 10 points, five rebounds and one assist. In the opening round win over Johnson Central, he had 19 points on 8-for-11 shooting, seven blocks, five rebounds and three assists.

He was a willing and nifty passer, had a terrific demeanor and has a nice shooting touch. He will need to add muscle and weight at Xavier, but he’s far better than I knew.

So was versatile 6-7 junior Kenny White of Madisonville North Hopkins, who certainly should have impressed Division I coaches with his play

White had 21 points on 9-for-12 shooting in a firstround win over Lincoln County along with eight rebounds, six blocked shots, two steals and two assists. In a 65-63 loss to Warren Central in the quarterfinals, he came back with 27 points on 11-for-16 shooting, 10 rebounds, two blocks, two assists and two steals.

He’s an explosive jumper and doing 20-for-28 from the field in two state tourney games where he made big shot after big shot shows his offensive capability. I’ve already got him on my 2020 Mr. Basketball watch list.

Kentucky women’s coach Matthew Mitchell hopes having two weeks off before his team opens NCAA Tournament play after a quarterfinal overtime loss to Missouri in the SEC Tournament can be a plus for a team that had to endure injuries to top players Maci Morris, Taylor Murray and Rhyne Howard during the season.

“Definitely I think for us right now it’s been a long season and I think our players have been giving a whole lot, and we will really relish the rest that we can get,” Mitchell said. “It’s also spring break for us, so it’s an awesome time for our players to mentally, emotionally and physically recover.

“We’ll hit it pretty hard and then try to catch a little more rest right before the (NCAA) selection show (on Monday). Just strike the right balance and it’ll be good for our team. I think for us, more than anything, we’re definitely banged up physically.”

Howard was sensational in the loss to Missouri. She had 25 points and six rebounds. Howard now has 489 points and needs two more to tie A’Dia Mathies for second most in a freshman season at UK. Howard already has 68 3-pointers, most ever by a UK freshman. Her 200 rebounds are already third most by a UK freshman and so are her 64 steals.

Quote of the Week: “We all took it personal when we lost just like the fans did. You have to understand that it is personal. We are still sitting here 33 years later talking about that game,” former Kentucky point guard Roger Harden on UK’s 59-57 loss to LSU in the 1986 Elite Eight after beating LSU three times earlier in the season.

Quote of the Week 2: “It is a double-edged sword. The negativity when you go on Twitter and social media after you lose a game and you are getting beat down hard by the same people who two weeks ago were loving you. You just have to stay positive and help your son not think about that,” Paul Washington, father of UK sophomore PJ Washington, on the toughest part of being the parent of a UK player.

Quote of the Week 3: “It came down to I love this community. I love this administration, Dr. (Eli) Capilouto, Mitch Barnhart. The guy that I work for is fantastic. I have become a part of this community and I love. We are doing some things that are special and those all had a part in the decision making when I decided to stay,” UK offensive coordinator Eddie Gran on why he turned down Georgia to stay at Kentucky.