By SUDHIN THANAWALA
The Associated Press 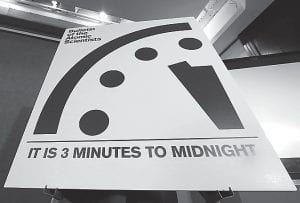 A sign showing the “Doomsday Clock” that remains at three minutes to midnight is seen after it was unveiled by the Bulletin of the Atomic Scientists during a news conference this week at the National Press Club in Washington. The clock was last moved January 2015, from five minutes to three minutes before midnight, the closest it has been to catastrophe since the days of hydrogen bomb testing. (AP Photo)

Rising tension between Russia and the U.S., North Korea’s recent nuclear test and a lack of aggressive steps to address climate change are putting the world under grave threat, scientists behind a “Doomsday Clock” that measures the likelihood of a global cataclysm said this week.

The Bulletin of the Atomic Scientists announced that the minute hand on the metaphorical clock remained at three minutes-to-midnight. The clock reflects how vulnerable the world is to catastrophe from nuclear weapons, climate change and new technologies, with midnight symbolizing apocalypse.

“Unless we change the way we think, humanity remains in serious danger,” said Lawrence Krauss, chair of the bulletin’s Board of Sponsors.

Krauss said the Iran nuclear agreement and Paris climate accord were good news. But the good news was offset by nuclear threats, including tension between nuclear-armed states India and Pakistan, and uncertainty that the Paris accord will lead to concrete action to reduce greenhouse gas emissions.

The scientists behind the bulletin adjusted the clock from five minutesto midnight to three minutes-tomidnight last year. They cited climate change, modernization of nuclear weapons and outsized nuclear weapons arsenals as “extraordinary and undeniable threats to the continued existence of humanity.” The clock was previously at three minutes-tomidnight in 1984, when the bulletin said talks between the U.S. and Russia virtually stopped.

From a climate change perspective, if midnight on the clock represents the disappearance of humanity, three minutes-to-midnight is overly dire, said Michael Oppenheimer, a professor of geosciences and international affairs at Princeton University who is not affiliated with the bulletin.

On the other hand, Oppenheimer said if midnight means humans have emitted so much greenhouse gas that dangerous climate change is inevitable, then three minutes is a “fair analysis.”

“I think the jury is out as to whether the Paris agreement will make a significant difference,” he said. “The key is whether countries over the next couple of years are able to agree on some important details that were left out.”

Michael Shermer, publisher of Skeptic magazine examining social and scientific controversies, said in an email that the Doomsday clock is “an exercise in pessimism and PR with little connection to the reality of moral progress made in the past half century.” Shermer cited reductions in the number of nuclear weapons since the 1980s and the absence of war between Europe’s great powers since World War II.

Perry raised concerns about rhetoric from Russia about the use of nuclear weapons and said the threat of nuclear disaster was greater today than during the Cold War. Shultz said the U.S. needs to engage Russia and China. Brown warned about “tipping points” in the fight against climate change.

“And around a tipping point, we may not be able to come back to a stable planet or one we’ll find very comfortable to live in,” he said.

The Bulletin of the Atomic Scientists was founded in 1945 by University of Chicago scientists who helped develop the first atomic weapons. The clock was created two years later.

The closest the clock has come to midnight was two minutes away in 1953, when the Soviet Union tested a hydrogen bomb that followed a U.S. hydrogen bomb test.