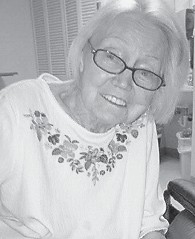 A daughter of the late Mark H. and Lovell Ison Creech, she was the widow of Elmon G. Potter.

She was the mother of the late David Wayne Potter and Ricky Elmon Potter, and a sister of the late Burley Creech, Carl Creech, Mark Edward Creech and George Donald Creech.

Funeral services for Mrs. Combs were held January 12 at Letcher Funeral Home in Whitesburg. Burial was in the Mountain Home Cemetery at Johnson City, Tenn.