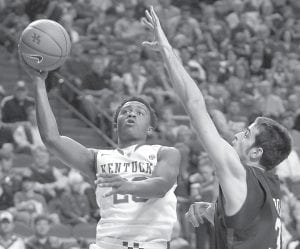 Kentucky’s Doron Lamb goes up for two of his 26 points in UK’s win against Samford Tuesday. (AP photo)

Both Samford and Kentucky were missing a key player. The difference was it hardly mattered for the third-ranked Wildcats.

Doron Lamb scored 26 points and Samford fell behind 11-0 early in an 82-50 loss to Kentucky on Tuesday night that extended the Wildcats’ home winning streak to 41 games.

“We were a little bit behind the 8-ball,” Samford coach Jimmy Tillette said. “I thought we competed throughout the whole game. We actually got better from half to half. That’s our measure of the game for our team.”

Kentucky (10-1) played without preseason All-America Terrence Jones, who missed the first game in his collegiate career after dislocating the pinky on his left, shooting hand on Saturday.

Darius Miller scored 17 points and Lamb hit 8 of 12 shots as the Wildcats hardly missed a beat early against Samford (3-7) without Jones, scoring the first 11 points of the game, pushing the lead to 45-22 at halftime and to as many as 34 points late.

“It was pretty cool, and more importantly, it was a great experience for our team,” Samford guard Jeffrey Merritt said. “It was a oncein a-lifetime deal for us. When we came out of the tunnel with 10 minutes until the game, we were shell-shocked. It was one of the greatest experiences a basketball player could have.”

Samford came in with consecutive wins over NAIA opponents, but has beaten only one Division I foe this season and lost its 10th straight against a Top 25 school since topping St. John’s in 1999.

Kentucky was swarming from the start with the 11-0 run keyed by Lamb, who hit the first of his four 3-pointers.

Miller twice hit 3s of his own to keep the Bulldogs from gaining any momentum early as the Wildcats started 16 of 20 from the field.

“Good coaching, superior talent and our team being a little nervous to start the game” contributed to Kentucky’s hot start, Tillette said. “We were a little starry-eyed, stuck in the mud with a Rupp Arena- kind of aura. I thought we settled in and after that competed.”

Kentucky is in the midst of a soft spot in its schedule until its rivalry game with No. 4 Louisville on Dec. 31. The Wildcats continue the stretch of lesser opponents by hosting Loyola (Md.) on Thursday and Lamar on Dec. 28.

“We learned a lot. We showed a lot of character by fighting and battling for 40 minutes,” Merritt said.