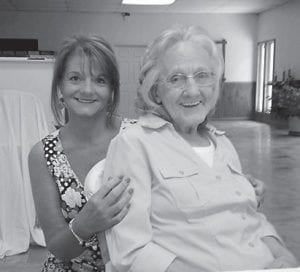 Never in a million years would I have believed we are going through what we are right now.

If you have read my entries in the last few months, then you know Mom hasn’t been feeling good at all. We have been to so many places and she has had so many tests. But, the whole time she has been telling us, “Honey, it’s my heart.” We even spent a weekend at the Whitesburg ARH Emergency Room. All her tests came back clean. No problems with her heart were found.

She was supposed to go Friday to PMC at Whitesburg and so we were just trying to make it to Friday. My sister Charlene told me after staying with her Monday night we might need to see if we could get her in sooner than that. I stayed with her Tuesday and Tuesday night and Mommy was miserable. She couldn’t sleep for feeling pressure around her heart.

Wednesday morning she was no better and kept saying, “I can’t go on like this.” I told her that her heart was fine from all the test results. She asked, “Then why does my heart feel like this?” 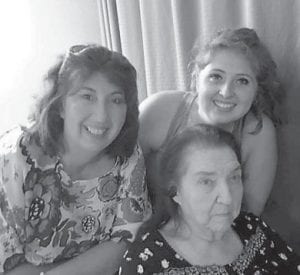 I called PMC to see if she could get in and they agreed to see her. I told her we were going and she said, “Honey, I don’t think I can make it, I’m too weak.” I told her she had to, we didn’t have any other choice. So, they finally sent her for a heart cath to Pikeville. The heart cath wasn’t done until Thursday (that’s another story in itself ).

Lo and behold, all this time my precious Mommy REALLY HAD BEEN HAVING PRESSURE AROUND HER HEART. She had openheart surgery in November of 2004 and two of those were blocked again. The aorta was okay. The other two were blocked. She had no other choice than to have the surgery again and they did it Friday morning.

They were able to fix the most important and worst blocked one but the other one was too tender and so too dangerous to bother. She is now in a private room.

Our brother, Albert Tacket, was able to come home Thursday evening from North Carolina and just left today, Monday. It surely was good to see him. I just hate that it was in these circumstances. 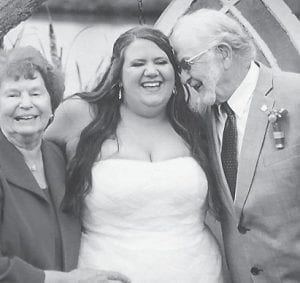 One of our longtime family friends, Gyrt Hall Cook, was also in the hospital at Pikeville Medical Center when Mom was having her heart cath. She had an ablation and a pacemaker and her daughter-in-law, Diane Holbrook Cook said she is doing good.

She also told me something Gyrt did after her surgery. She said her granddaughter, Angie Cook Lucas, was bent down over Gyrt lying in her hospital bed and was getting ready to speak to her when Gyrt grabbed out at her and said, “BOO!” She didn’t lose her sense of humor through all her heart trouble. She will be 85 in December. She and Mom were all the time comparing their children. She had four boys and a girl and Mom had four girls and a boy.

Preacher Bill Craft’s wife, June, is now in Pikeville Medical Center, also. She had a fall and broke her arm right below her shoulder. She had to have surgery on it and from what I have read on Facebook she came through the surgery fine and will go home soon. She and the rest of her family are desperate for your prayers.

It was good to get to go back to Senior Citizens and the rec center today. Everyone was so concerned about Mom and wanted me to be sure and tell her how much they miss her and are praying for her.

One of our good friends, Bennett Combs, also had to have open-heart surgery recently. He had to have a valve replaced and he had it at Pikeville Medical Center. His daughter Brenda Boggs brought him to the center today for the first time since his surgery. He looked so healthy, even though he has lost a lot of weight. He also had the same doctor Mom had, Dr. Halpin. They were as thrilled with him as we were.

Speaking of Dr. Halpin, I have to tell this on Charlene. My husband, myself, Charlene and her husband Rick were all in Mom’s room Thursday evening when he came in to talk with her about her heart cath. He came in with his nurse and introduced himself, shook hands all around and commenced asking Mom questions. Charlene started answering his questions. He stopped her and said, “Wait a minute. I don’t want to hear it from you, I want to hear it from her.” Well, if you know Charlene you know that didn’t stop her. He asked Mom another question and Charlene wanted to tell him something. He again said, “No, I want to hear it from her, I’m interested in her answers, not yours.” I said, “Hey, I like you.”

Th en he talked to Mom about the results of the cath and told her the surgery they needed to do. He asked her what she thought about that and Mom said, “Well, I know I can’t live like this.” After the discussion was over Charlene asked if she could talk now. He “okayed” it and she said, “I just wanted to tell you how active she was before she started having heart problems. Now wouldn’t that be important?”

It is so nice to have family and friends to call on in times of need. The Bible says in 1 Thessalonians 5:17 — Pray without ceasing. In Philippians 4:6 — Be careful for nothing; but in every thing by prayer and supplication with thanksgiving let your requests be made known unto God.

I love taking my grandchildren to school in the mornings and having our little prayer time before they leave the car. I truly believe we should teach them no matter what their requests, nothing is too big or small. He cares about them all.

My grandson accidentally sat on a salamander once and squished it. He prayed for that salamander for two or three years afterwards. They all three believe in the power of our prayers because they have seen so many of our prayers answered. I wish everyone had this type of faith.

Please keep praying for Rick Collins. He is in a lot of pain now and also remember his family. Please continue to pray for our pastor Bill Jones and his wife Sandy. Two years ago they buried their son Bobby.

Oma would say, remember to be in church somewhere Sunday morning and I say if your church has services Sunday evening or throughout the week, God wants you there then, also.