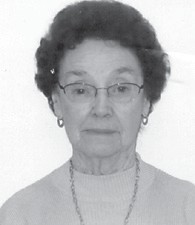 Born in Whitesburg, she was a daughter of the late Charles and Nora Fields Blair and the widow of Robert L. Williams. She was also preceded in death by a brother, Maurice Blair, and a sister, Irene Schopler.

Mrs. Williams was employed through the Letcher County Judicial System as an administrative assistant for more than 20 years. She was a member of Trinity Presbyterian Church and the Middletown Woman’s Club.

A memorial service was held July 24 in Louisville, with inurnment following at Resthaven Memorial Park.