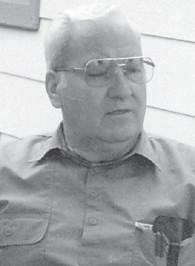 Hello everyone. Hope you are all doing okay and enjoying the nice weather.

Time is going so fast. I can’t believe it’s time to write again. Not much has been going on, or I haven’t heard about it.

We have had some car accidents. One killed and one hurt badly on the Whitesburg by-pass, and some shooting in Jenkins with four people killed. I don’t know all the details, but I’m sure it’s in The Eagle.

Dorthy Tacket and three of her daughters, Jeanette Yonts, Deloris Holbrook and Charlene Mason, all went to Hasyi, Va., to hear the Primitive Quartet and the Jackson Family sing, and they sure enjoyed it.

Our sympathy goes out to the family of Nadine (Raleigh) Craft. She lived in Whitco a long time ago.

I enjoyed a call from Linda Sergent this past week. She asked about a lot of people, Hazel Hart and my sister Joann Brown and her husband Don of Indianapolis, Ind. Linda is a daughter of the late Bethel and William Martin, I think. 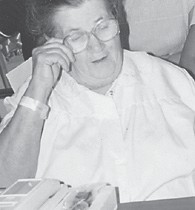 I’m glad John is back home now. He has been to the lake fishing and visiting with his sister Judy Greene and husband Johnny.

I’m sure the folks who had a garden are enjoying it and working hard canning it.

Our church had a little shower for one of our young girls, Hannah Maggard of Cowan, a daughter of Darlene and Allen Maggard. She is leaving for college in Morehead, and I’m sure she will do well. We all had a good time and some delicious food.

I didn’t see Emma Lou Engle’s news this week. I hope she is doing okay.

I got a call from Iva (Absher) Cheatham the other day. She said she’s been having some health problems, and her son Jack Absher has not been doing well. She also told me that one of my old Marlowe friends, Emily Sue (Brown) Thorpe, had died. She was a daughter of the late Edna and Sylvan Brown. He was killed in a coal mining accident in Marlowe a long time ago. Our sympathy goes out to her family. 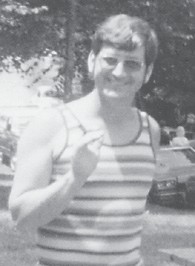 John Howard celebrated his birthday August 8, also the birthday of his mother, the late Cindy Howard. Whitesburg correspondent Oma Hatton, his sister, says, “He was one of her best birthday gifts. This picture was made in 1976, but he still looks good!”

She and I were good friends. She used to be a nurse in Lexington. She was married to the late Clyde Thorpe of Marlow, who had died a long time ago.

Just pray for all those who are sick.

I guess it’s about time for school to start. Some of the kids will be glad and some would rather enjoy the pretty days having fun, but all good things have to end sometime so it’s back to school.

I’ll miss my great-grandchildren laughing and playing and swimming in their pool. They grow up so fast! They are good children and they have lots of friends of all ages visiting them.

I guess my four sons are getting ready for the Bristol races. They go every year and always report a great time. I’m so glad my boys are real close and enjoy being together.

They all stay in Larry’s camper and sit up and talk all night. Larry keeps his grill going and they always make a trip to Golden Corral and ‘pig out.’ You can never go there for a little snack.

I was so glad to read in last week’s Eagle that we may be getting a ‘No Kill’ animal shelter. I would love that! I love animals and can’t stand to see them go where they may have to be euthanized. To me they are like little four-legged people. I love mine and take good care of them.

Well, I’m sure you are tired of reading all this stuff, so may God bless all of you. Try to be in church somewhere this week if you are able.