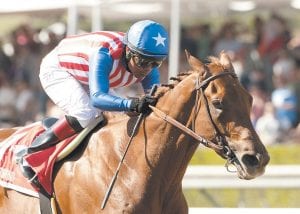 Step right up, American Pharoah. Final rehearsal’s a few days away, and it’s time to see whether you or your dance partner, Dortmund, will be the Kentucky Derby favorite.

Dortmund proved there’s little doubt he’s No. 1 again on the AP’s latest Run to the Roses Top 10 Kentucky Derby list following a commanding 4-1/4-length win in the Santa Anita Derby over the weekend. The imposing colt comes into the May 2 Derby with a 6 for 6 record, the same as Seattle Slew (1977) and Smarty Jones (2004) before their Derby wins.

American Pharoah, meanwhile, remains No. 3 and is all set for the Arkansas Derby following a six-furlong workout in 1:11.60 at his home base at Santa Anita Park on Sunday. He comes into the final major Derby prep with four wins in fivestarts,includinga61/4-length romp in the Rebel in the rain at Oaklawn Park.

Bob Baffert, who added a third Derby starter after One Lucky Dane ran second to Dortmund in the Santa Anita Derby.

Carpe Diem, trained by Todd Pletcher, retains the No. 2 spot after his impressive three-length win in the Blue Grass at Keeneland Race Course on Saturday. Sunland Derby winner Firing Line, who tested Dortmund twice before losing each time by a head, is No. 4.

Frosted soared into the rankings at No. 5 with a two-length win in the Wood Memorial at Aqueduct Racetrack on Saturday while El Kabeir ran third and dropped out. He’s still Derby bound.

The owner of American Pharoah says his 2-year-old champion is the real deal and is looking for a comfortable win in Arkansas.

“We’re hoping that he would win it easy, with not too much effort taken out of him,” Ahmed Zayat of Zayat Stables, which also owns El Kabeir, said Tuesday. “We’re totally high on this horse.”

The Arkansas Derby carries Derby-qualifying points of 100-40-20-10, and is a last chance for several Derby hopefuls. Among them is Far Right, No. 8 this week, but with a borderline 22 qualifying points.

Louisiana Derby winner International Star leads with 171 points; Dortmund is second with 170; and Carpe Diem third with 164. Bolo, third in the Santa Anita Derby, is 20th with 30 points.

The final Derby prep is the Lexington Stakes on April 18, with points scaled down to 10-4-2-1.

7. International Star ( Mike Maker, Miguel Mena): May not be among Derby favorites, but the resume is a good one: Swept Lecomte, Risen Star and Louisiana Derby at the Fair Grounds. … Next start: Kentucky Derby. … Odds: 17-1.