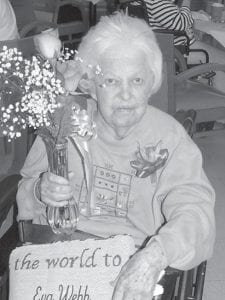 On May 12, residents of Letcher Manor Nursing Home and their families enjoyed a Mother’s Day brunch. Residents receiving awards were Eva Webb, 100, the oldest mother, and Mary Hayes, 38, the youngest mother. Each female resident received a corsage. Letcher County Judge/ Executive Jim Ward joined in the festivities and read a proclamation in honor of National Nursing Home Week, which recognizes nursing home staffs. Pictured holding a vase of flowers is 100-year-old Eva Webb.

Plans are all made for the upcoming Doty Days School reunion. It will be on June 15 beginning at 9:30 a.m. with coffee and doughnuts and the program will start at 12:00 with finger foods and covered dish meal for lunch.

Anyone who ever attended Doty School is encouraged to come and join in on the stories of going to school at Doty Creek, to catch up with former classmates, or just bring a finger food or covered dish and have lunch with your old friends. It will be at the old schoolhouse.

Well, by now Roland Blair should be officially retired, and a big congratulations to him. He and Carol can relax (ha, ha!). I believe they’ll stay as busy as ever, and maybe even busier. There’s always so much to do these days.

I hope the Lord blesses them with a long, happy retirement and plenty of time spent with their children, grandchildren, family and friends.

Congratulations also to Jacquie Banks Caudill on her recent graduation from Hazard Community College. I think she has already gotten a job and first payday, but being a wife and mother of two means she has had a big job for years already.

Misha Hall graduated from Morehead on Saturday, and Larry and Sandy attended. While there they visited with Sandy’s uncle and aunt, Luther and Betty Jo Adams.

We’re very proud of Jacquie and Misha and all college grads.

This past weekend was the memorial for deceased members at the Old Doty Creek Regular Baptist Church. The Lord has blessed this old church to be one of the oldest churches in our area, and a lot of the deceased members were ancestors to most everyone in the Jeremiah area.

A lot of their families were there to remember and show respect to their deceased loved ones who were faithful, God-fearing members of the Doty Church, and to remember the Lord, first and foremost. It was so good to see everyone who attended.

Merle and Eolia Caudill were here for church and visited with Ila and Tammy Adams while here. Jerry, Ila and Tammy were able to attend the Doty service.

The late Claude Caudill of Ohio always came in with his daughter, Dianna, to attend the memorial and this year she came in to attend and decorate their family graves by herself. She stayed with Aileen Blair while here and bought our old churn from my shop. She and Aileen stopped by on Saturday.

The bake sale and donations from the roadblock held at Isom for Aaron Blair’s medical bills did really well on Saturday.

Hope all mothers had a good Mother’s Day and were able to have their family with them on their special day. God bless all whose mothers are deceased as I know it would have to be a hard thing.

Jerry, Bonita, Liberty and Noah, Bob, Hunter and myself all had dinner with Don and Coreen Pridemore on Sunday.

Ending on a sad note with the death of Pressie Adams, widow of Fred Adams. She lived a long life, and her family took good care of her these last few years. The service was to be on Monday evening and funeral services were Tuesday at Blair Branch Church. Our deepest sympathy to her family.