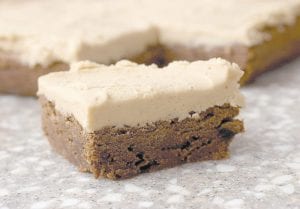 These dense, chocolately brownies taste fine made with traditional creamy peanut butter, but are over the top when spiked with something a bit more interesting, such as a chocolate- or cinnamon-laced peanut butter. (AP Photo/Larry Crowe)

Sift the flour and salt into a medium bowl. Set aside.

In a microwave-safe bowl, combine the butter, chocolate and peanut butter. Heat in the microwave in 20-second intervals, stirring in between, until melted and smooth. Set aside.

In a large bowl, use an electric mixer to beat together the eggs and sugar until fluffy. Gently whisk in the chocolate and peanut butter mixture, then fold in the flour.

Transfer the batter to the pan and bake, rotating front to back halfway through, for 25 to 30 minutes, or until slightly firm to the touch and a crust has formed on top. Allow to cool on a rack.

When the brownies have cooled, make the frosting. In a medium bowl, use an electric mixer to beat the peanut butter and butter. Add the powdered sugar and milk, beating until smooth. Drizzle in additional milk if the frosting is too thick. Frost the brownies, then cut into bars.