By JON KRAWCZYNSKI
The Associated Press 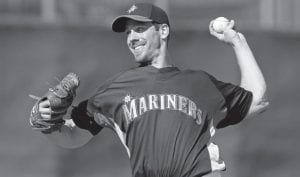 Seattle Mariners starting pitcher Cliff Lee threw a pitch during a simulated game in a baseball spring training workout in Peoria, Ariz., last month. Lee, the ace of the team’s pitching staff , was placed on the 15-day disabled list Sunday with an abdominal strain, an expected move given the 2008 AL Cy Young Award winner’s health troubles this spring. (AP Photo)

With the Major League Baseball season approaching, former pitcher of the year Cliff Lee didn’t have time for another abdominal strain.

Lee had a similar injury twice before, and on both occasions it kept him out for at least six weeks. This time, he was anxious to get back much sooner to help his new team, the Seattle Mariners.

So the pitcher chose an unusual treatment in which his blood was drawn, then a solution created from it injected back into his body. The technique, known as platelet-rich plasma injection therapy, has become trendy among top athletes — even though there’s doubt in the medical community about whether it works.

“It’s helped a lot of athletes speed up their healing process,” said Lee, who had the treatment on March 19. “I’m hoping it does the same for me.”

A recent study in the Netherlands found the treatment was no better than a placebo, the kind of conclusion reached about more common alternative therapies like ginkgo biloba (for memory) and glucosamine (arthritis) by the National Center for Complementary and Alternative Medicine in the United States.

Other athletes known to have undergone PRP therapy, also known as “blood spinning,” include NFL receiver Hines Ward, golfer Scott Verplank, NBA power forward Kenyon Martin and figure skater Patrick Chan. The New York Giants, D.C. United of Major League Soccer, and the San Diego Padres are among U.S. pro sports teams that have had players give it a try.

But none of the athletes spoken to by The Associated Press could say that it improved their condition.

“It has not produced the results I was hoping for,” said Verplank, a five-time winner on the U.S. PGA Tour who used it on his injured left elbow. “I wouldn’t say it was a failure, but after six weeks, I didn’t feel like I had a new elbow.”

The procedure involves withdrawing about an ounce of blood and spinning it down for about 20 minutes in a centrifuge. That typically yields about a teaspoon of PRP, which is then injected directly into wounded tissue. The idea is the platelets contain proteins known as growth factors that are thought to promote cell growth and healing.

“It actually feels like a cramp,” said NBA All-Star Brandon Roy, who had the treatment for a hamstring injury. “They shoot it in there and my leg is sort of cramping.”

PRP has been used in surgery and other fields for at least two decades to help with bone and tissue healing. More recently, sports medicine specialists have used PRP injections in outpatient settings as an alternative to surgery.

The therapy has gained notoriety in the past few months partly because of the case of Dr. Anthony Galea, a Canadian sports medicine doctor at the center of a drug investigation in both his country and the United States. Galea told The Associated Press last month that he has been “spinning blood for seven, eight years.”

Its use by athletes also has stoked controversy because of allegations that some may have combined PRP with bioengineered human growth hormone, a banned substance in sports. Some agencies also consider PRP a potential performance-enhancer, although doctors who use it insist it merely helps the healing process.

The World Anti-Doping Agency has restricted PRP use because injections into muscle can have potential performance-enhancing effects. Injections into tendons and other tissues are permitted by WADA, but athletes must document that a treatment is for medical reasons.

Mautner insisted “there’s absolutely nothing performance enhancing with it.” However, he cautioned that “it would be very easy in the wrong person’s hands to add substances like growth hormone to the mixture.”

Cases in which PRP are typically used include tendinitis in the elbow, knee and Achilles’ tendon, but that list is growing. Atlanta Braves pitcher Takashi Saito underwent PRP treatment on his right elbow, avoiding surgery and helping the Los Angeles Dodgers to the playoff s in 2008.

Saito said through an interpreter that he wasn’t sure if it worked because doctors later determined the injury was in a tendon higher in his arm and not in the elbow area.

“I never had a vision it would work for all types of problems,” said Dr. Allen Mishra, an orthopedic surgeon at Stanford Medical Center and one of the first researchers on PRP.

PRP treatment is not approved by the U.S. Food and Drug Administration, and it’s not cheap — each injection costs $500 to $1,500. More than one injection is often needed.

Rigorous scientific evidence on its effectiveness is sparse. Several small studies have had mixed results, and even doctors who endorse PRP treatment say more extensive studies are needed to prove its usefulness.

“It’s a promising treatment that has shown a lot of clinical success and is probably going to be used more and more in the future,” Mautner said. “But I definitely think we need to make sure the science backs up all the excitement.”

The Dutch study, published in the Journal of the American Medical Association, found that PRP patients with Achilles’ tendon injuries fared no better than those who received a placebo injection of salt water. Both groups improved after six months.