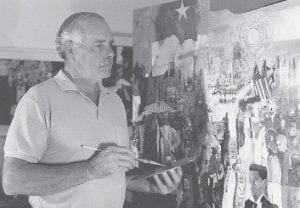 Among the most eminent artists of our time with local origins is Letcher County native Doug Adams. His career as an independent artist and educator has spanned 30 years. His artwork can be found in many of our homes, public places and institutions. He has worked with several noted Kentucky authors including James Still and Jesse Stuart depicting images of scenes from writings such as Kentucky is My Land.

Additionally, his works hang in many major collections throughout the United States and abroad. One of his works hangs at Morehead State University where he served as a full-time instructor of art for 15 years. Doug has exhibited his work at many prestigious venues including George Washington University and Speed Museum. He has served as president of the Kentucky Art Education Association and has received numerous prestigious awards during his career. He holds memberships in the Southern Watercolor Society, Kentucky Heritage Artists, Kentucky Watercolor Society and Kentucky Guild of Artists and Craftsmen.

June Savage-Adams is a graduate of Morehead State University where she earned degrees in studio art and education and behavioral sciences. Although she grew up in the mountains of eastern Kentucky, she also has roots in Fort Wayne, Ind., where she lived for many years as a young woman.

June has been described as a multi-talented individual with varied interests. Influenced at an early age by a Sunday school teacher who commended her artwork, she continued toward an artistic future. She holds master’s degrees in education and behavioral sciences and will complete a master’s degree in studio art about February. June has worked as a teacher and school guidance counselor in public education.

“After researching and viewing the aftermath and methods of abortion legally available to people I was psychologically and emotionally shocked,” said Savage Adams. “My work is in direct relationship to that reaction. I choose a mixed media approach because it allows for the best creative and intriguing expression of the spiritual ideas and concepts I present. My work is interactive in the sense that it seeks to involve the viewer both emotionally and intellectually. My art appeals to the viewer through the sense of motion, visual touch and sound.”

She has won numerous awards and honors in art exhibitions with the likes or Tom J. Whitaker, Sam McKinney, Tim Sizemore and Doug Adams. Besides sculpture, she has enjoyed writing and singing her own poems and songs since she was a very young child. She currently resides in Morehead, and works out of a studio she shares with her husband, eastern Kentucky artist Doug Adams.

June says that as a wife of such an accomplished artist and educator, “every day is a new and wonderful beginning for seeing, hearing, and experiencing art and everything it has to offer.” She says that Doug has been one of the greatest influences on her own work and where she finds continuous inspiration.

The Letcher County Tourism and Convention Commission will sponsor a townwide art exhibit beginning Friday, Dec. 12. Featured artists Doug Adams and June Savage-Adams will exhibit their paintings, sculptures and ceramics at the Harry M. Caudill Memorial Library during regular library hours from Dec. 12 through 19. Refreshments will be served from 2 to 6 p.m. on the opening day. The annual Christmas Parade will begin at 5 p.m. so come early and enjoy the art exhibit before the parade.

The Cozy Corner and Appalshop will also be exhibiting artwork consisting primarily of the works of contemporary Appalachian artists. Dr. John Pellegrini will be exhibiting his private collection of artwork at his business address next door to Dr. David Narramore’s office on Main Street.