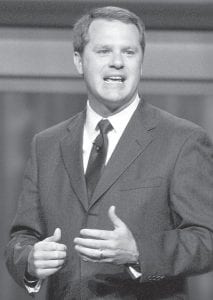 Wal-Mart Stores Inc. is ushering in a changing of the guard as the world’s largest retailer confronts slower growth and challenges to its reputation.

Doug McMillon, head of Wal-Mart’s international division, will succeed CEO and President Mike Duke, 63, when he steps down on Feb 1 after five years in those roles. McMillon, a 23-year company veteran, will become the fifth CEO since Wal-Mart’s founder Sam Walton.

The change at the top is indicative of a recent shift in strategy at the company best known for its cutthroat pricing and big box stores. McMillon, 47, is expected to infuse a youthful spirit into Wal-Mart’s culture at a time when the company is trying to reinvent itself to attract a generation of shoppers who gravitate toward tablets and mobile devices.

The move also is a testament to the company’s continued focus on its international division. McMillon, who started at the company in 1984 as a summer intern, left and came back in 1990 to work at a Wal-Mart store before holding several jobs, including a three-year stint as president and CEO of the Sam’s Club division.

But in February 2009, he succeeded Duke to head the international division, which accounted for 29 percent of its $466.1 billion in annual net sales in Wal- Mart’s latest fiscal year. In that role, McMillon has been expanding Wal-Mart’s everyday low prices to Brazil and China, while trying to boost profitability by closing some stores in those countries.

“ This is a very natural progression,” said Brian Sozzi, CEO and chief equities strategist at Belus Capital Advisors. “Wal-Mart’s engine of growth has been international.”

McMillon and Duke declined interviews with The Associated Press through the company’s spokesman Dave Tovar.

McMillon faces challenges. Wal-Mart is seeing its low-income shoppers in the U.S. struggling with stagnant wages and rising costs. At the same time, Wal-Mart faces fierce competition from online competitors and dollar chains that offer convenience and lower prices.

The company also has image problems. Wal-Mart is being pressured to further increase its oversight of factory conditions abroad following a building collapse in April in Bangladesh that killed more than 1,127 garment workers. And it continues to face criticism over its treatment of its hourly workers.

Additionally, allegations of bribery in Wal- Mart’s Mexico operations that surfaced in April 2012 have slowed business overseas. Wal-Mart allegedly failed to notify law enforcement that company officials authorized millions of dollars in bribes in Mexico to speed up getting building permits and gains other favors.

The New York Times, which broke the story, reported that Wal-Mart offi- cials, including Duke, were allegedly informed starting in 2005 about the bribes. McMillon was not linked to the incident because he wasn’t working in the international division at the time.

Tovar told The Associated Press that Duke’s decision to leave Wal-Mart was “a personal one,” and had nothing to do with the bribery allegations. “He decided it was time to retire,” said Tovar, who added that Duke approached Rob Walton, the company’s chairman and son of the late founder, and the board voted Friday.

Duke became CEO in February 2009 at a time when the retailer’s strong performance made it the rare winner during the Great Recession. But that soon changed a few months after he took the helm.