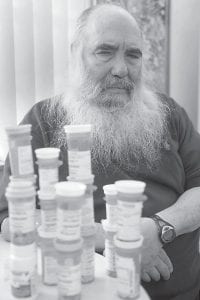 Morton Genser poses with his prescription drugs at his home in Tamarac, Fla. Lawmakers trying to woo seniors skeptical of their health care overhaul have been emphasizing their plan to close the “doughnut hole,” a gap in Medicare drug coverage that can cost a person thousands of dollars a year. (AP Photo)

Lawmakers have wooed seniors skeptical of the health care overhaul by emphasizing the plan would close the “doughnut hole” — a gap in Medicare drug coverage that can cost thousands of dollars a year.

But getting support for the entire overhaul from this powerful voting bloc has been difficult, despite Democrats’ repeated mentions of the issue in town hall meetings, interviews and congressional hearings.

Janet Cohen, 75, would like to see the doughnut hole closed, but like many, she still is uncertain about the health bills.

Cohen and her 97-year-old mother are both in the doughnut hole because their out-of-pocket drug costs exceeded $2,700 this year. Rather than just a copay, each one now must foot the entire cost of their medications for the rest of the year, or until their annual spending reaches $4,350, which isn’t likely to happen. If it does, the government will again subsidize the costs.

The Cohens, who live just north of Miami, are both on Social Security and eating through savings. Janet Cohen just learned she was in the doughnut hole when she went to pick up her supply of Aricept, which she takes for memory loss. Instead of the copay, she was charged nearly $200.

“I can’t afford my medicine, is it OK if I miss like one month?” she asked the pharmacist.

He suggested taking the drug every other day, but said the effectiveness could be compromised.

Medicare Part D established a new prescription drug benefit in 2006. The doughnut hole was designed to reduce the overall cost of the program. An estimated 3.4 million seniors fall into it each year.

Most people never see the other side of the doughnut hole. They simply wait for New Year’s Day. The House health care bill would close the gap gradually until it’s eliminated in 2022.

There are about 39 million people aged 65 and older in the U.S. and they voted at a higher rate than any other age group in the 2008 election, according to the Census Bureau. The 40-million-member AARP has endorsed the House’s version of the bill, but voters aren’t yet sold on the plan.

The latest Kaiser Health Tracking Poll, released last month, found just 32 percent of those 65 and older believed passage of a health bill would leave them and their families better off, compared with 44 percent of respondents under the age of 65.

When asked about elements of the health overhaul plan that are “extremely” or “very” important, the doughnut hole was the No. 3 issue for Republicans, and No. 4 for both Democrats and independents.

Rep. Kathy Castor, D-Fla., saw a summer town hall meeting become a shouting match. In subsequent visits to senior centers, constituents expressed worry their Medicare costs would increase or that they would no longer be able to see their doctors.

The doughnut hole, she said, has helped garner support for the overhaul.

“It’s easily understood that eliminating the Part D doughnut hole will put cash back into the pockets of seniors who need it desperately,” she said.

Some will grovel to avoid the doughnut hole. Maida Genser meticulously keeps track of her 72-year-old husband Morton’s drug costs, trying to determine when he’ll hit the threshold for his numerous pills to control diabetes, blood pressure and other problems.

As the limit approached in October, 66-year-old Maida had a strategy: “I just kept begging different doctors for samples.”

Others aren’t sure what to do. Evodkia Kresch, 83, takes pills for glaucoma, diabetes and heart problems and has been in the doughnut hole for several months. She grew up in Ukraine and lost her parents and six siblings in the Holocaust. Her husband died two years ago and she lives off a Social Security check of about $1,300 a month. She doesn’t have much hope things will change in Washington.

A recent round of refills cost her $412. She paid for them with her meager savings.