Dr. King ‘did a beautiful job’ 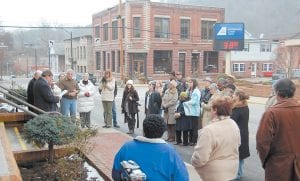 Jenkins Mayor G.C. Kincer remembers sitting near the front of a movie theater in Jenkins in the late 1950s while his friends who were black had to sit in the back. He remembers using restrooms which were restricted for use by white people only.

“I never went to school with a black person,” said Kincer, one about 50 people who gathered in the Appalshop theater in Whitesburg on Monday morning to observe Martin Luther King Jr. Day. “I lived next to them, played with them and I never understood.”

Kincer said he grew up singing “red, yellow, black or white, we are all precious in God’s sight.” He said he is ashamed for not having the courage back then to go sit with his friends at the movie theater.

“I appreciate (Martin Luther King Jr.) for bringing that reality to me,” he said.

“How can anyone overcome racism when you don’t know a person of color?” asked Fields.

In its 14th year of hosting the MLK breakfast, the Cowan Community Action group also organized an appreciation march on Main Street to the Letcher County Courthouse.

McRoberts resident Lois Thompson remembers how hard it was for her when the all-black Dunham High School closed and she started attending Jenkins High School in 1964.

“We felt like outcasts,” said Thompson. “Hatred is not born in you, it is taught.”

Thompson said when she was a little girl she didn’t know what prejudice was.

“People are people,” she said. “It doesn’t matter what color your skin is.”

Janis Campbell, one of the students who was a part of the youth group in 1997, said King was successful at helping open doors that weren’t available before in a nonviolent manner.

“He wants us to do it with a style, a grace,” said Campbell. “Something that won’t come back and bite us.”

Jenkins resident Tommy Lee Wright said King dared to stand up and speak for the disadvantaged.

“Martin Luther King Jr. lived for hope,” said Wright. “He stood up and fought for the equality of all people. Equality is supposed to be the heart of democracy.”

Vanessa Hall, of Seco, said Americans have come a long way concerning race relations but still have a way to go.

“That’s the best we can do is to make things better than they were yesterday,” said Hall.

Bishop Willie L. Lamb, pastor of The Church of God Militant Pillar and Ground of Truth in McRoberts, was the main speaker at the MLK Day event. He told a story of how he went with his aunt, uncle and cousin to Alabama and a police officer stopped them on their way and asked where they were traveling. He said the police officer ordered the cousin to name what every key on his keychain belonged to before he let them continue on their way.

“I had never seen nothing like that,” said Lamb. “My aunt said when you get to Alabama don’t look at white people. She had me scared to death.”

Lamb said something had to happen to get people where they are today.

“We’ve come a long way and I thank Dr. Martin Luther King Jr.,” said Lamb. “That was his mission. He went the way God wanted him to go. This man did a beautiful job.”