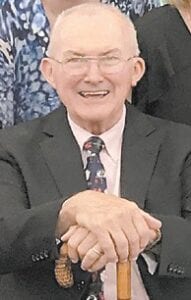 Ronald Newton Collier, M.D., was the first child of Iva Adams Collier and Newton Willard Collier of Mayking. Dr. Collier was born on July 10, 1939, in Mayking. He died on Sunday morning, July 26, at the University of Kentucky Medical Center in Lexington. He was 81 years old.

Ronald Newton Collier was a graduate of Whitesburg High School. He went on to earn his Bachelor of Science degree at Union College in Barbourville, and his Doctorate of Medicine at the University of Louisville. He served two years in the Army, posted to Fort Sam Houston, Texas, for training, and then to Fort Benning, Georgia, where he was promoted to Major. He returned to his pediatric practice in Louisville in 1970, serving as the President of the Jefferson County Pediatric Society, the President of the Jefferson County Medical Society, and as a guest lecturer for the University of Louisville Medical School. He also led teaching rounds for UofL medical students. He was a member of the Kentucky Medical Association (KMA), the American Medical Association (AMA), the Kentucky Academy of Pediatrics, and the American Academy of Pediatrics, and served on the Board of Directors for the Kentucky Medical Insurance Company.

He was a deacon at West Broadway Baptist Church in Louisville for many years, enjoying additional community service roles including providing physicals for students and their families at Wolfe County High School and playing Santa Claus for the church’s annual Christmas dinners.

After retiring from his practice in Louisville, and enjoying travel with his wife and friends, the couple settled in Hazard, where he joined the Hazard Clinic as a part-time pediatrician. The Colliers joined the First Presbyterian Church of Hazard, and he served as elder. He was back home in the mountains of eastern Kentucky where he enjoyed taking care of the children and families of the region where he grew up. He retired from the Appalachian Regional Hospital Hazard Clinic in 2019.

Dr. Collier loved fishing, reading murder mysteries, and most especially spending time with his children and grandchildren whether they were taking a walk or he was watching them play baseball, volleyball, lacrosse, or basketball. Dr. and Mrs. Collier would have been married 60 years on August 13, 2020.

One response to “Dr. Ronald Newton Collier dies at 81”