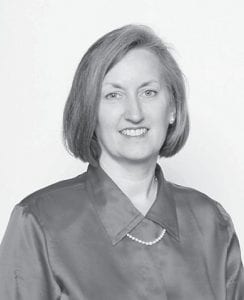 Dr. Jenny Ison Stigers was installed as President of the American Board of Pediatric Dentistry recently in San Diego, California. Dr. Stigers is an Associate Professor at the University of Kentucky College of Dentistry. She began her career with UK at Kosair Children’s Hospital in Louisville and currently serves as director of the West Kentucky Mobile Dental Program serving Marshall and Fulton Counties.

She graduated from Morehead State University and obtained her dental degree from the University of Kentucky. She completed a two year General Practice Residency at UK and then a residency in pediatric dentistry at Indiana University/ James Whitcomb Riley Hospital for Children in Indianapolis.

Dr. Stigers became certifi ed by the American Board of Pediatric Dentistry in 1995 and was elected as a Director of the Board in 2008. After becoming a Director, she served as Chair of the Qualifying Examination, the examination covering scientific and biological principles that support the clinical practices of contemporary pediatric dentistry.

She serves the American Academy of Pediatric Dentistry (AAPD) as editor of its Reference Manual, an annual publication of its oral health care policies and clinical practice guidelines, and as chair of the Task Force on Strengthening the Science in AAPD’s Guidelines and Journals. She was recipient of AAPD’s Leadership

Award in 2004 and selected as Pediatric Dentist of the Year in 2008. Dr. Stigers also chosen as a member of the first cohort of the AAPD Leadership Institute at the Kellogg School of Management (2004-06).

Dr. Stigers is married to Stephen W. Stigers, M.D., D.M.D. They live in Cape Girardeau, Missouri with their daughter, Li Fu, and 4 dogs. She is the daughter of Glennon B and Thelma Caudill Ison of Flemingsburg, Ky.

She is the granddaughter of the late Mary and Grant Ison of Kingdom Come Creek and the late Beulah and Cassel Caudill of Little Cowan.