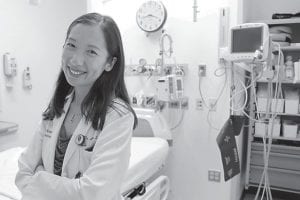 Medical resident Leana Wen stands in front of a bed in the emergency department at Harvard-affiliated Brigham and Women’s Hospital in Boston. Wen chose emergency medicine because the hours are more flexible than those of primary care physicians. (AP Photo)

True, they may shun a 24/7 on-call solo practice and try to have a life outside of work.

Yet they say they’re just as committed to medicine as kindly Marcus Welby from 1970s TV, or even grumpy Dr. House.

The practice of medicine is in the midst of an evolution, and millennial and Gen X doctors seem to be perfectly suited for it and in some ways may be driving it. The federal health care law is speeding some of these changes, too.

“It’s a fortunate accident,” said economist and health policy expert Robert Reischauer. “The two will reinforce each other.”

These doctors embrace technology and teamwork. They like electronic medical records and smartphone apps. And they like sharing the load with other doctors on the team.

Emal Nasiri and Leana Wen are part of the new breed.

Nasiri, 32, is a medical resident at the University of Oklahoma in Tulsa. He likes the idea of working in a large health plan group where doctors, specialists and other medical staff work as teams, with easy access to patients’ electronic medical records. That kind of setup is more likely to be “wired” than smaller practices, and Nasiri can’t imagine working without his iPad.

Wen, 29, will soon finish a residency in emergency medicine at Harvard-affiliated Brigham and Women’s Hospital and Massachusetts General Hospital. She’s also a newlywed whose husband is an information technology project manager.

“I want to have a balanced life that includes having time for my family,” she said.

She chose emergency medicine because the hours are more flexible than those of primary care doctors. That will allow her to work part-time in the ER and follow her other passions — teaching, research, writing and blogging about empowering patients to get the best medical care.

Wen finds her smartphone as handy as her stethoscope. Its apps help her quickly figure out proper medicine doses for critically ill patients, or translate medical instructions for Spanish-speakers. That means she doesn’t have to wait for a hospital translator to arrive, and she thinks it makes patient care safer.

She says those who call doctors with outside interests less committed have “a fairly limited world view.”

“We need doctors who ‘just’ practice medicine, but we also need these other doctors who can improve medical care on the larger scale. It is also better to have those taking care of you to take care of themselves and their families, so I would argue that it is a healthier … and in some ways, more balanced workforce that is emerging,” Wen said.

Dr. Darrell Kirch, president of the Association of American Medical Colleges, thinks these new doctors have a broader view of medicine and life than their predecessors, and calls that a positive trend. “I see no evidence that indicates that their ethical commitment is any weaker, that they care any less for patients,” he said.

When Kirch graduated from medical school 35 years ago, he envisioned starting a small solo practice, like many of his peers. A mentor steered him into research and work at an academic medical center. But that was not the norm.

“A typical model was of a male physician who plunged into medicine and was supported in doing that by a totally supportive spouse or partner who often gave up any work aspirations of their own,” he said.

Newer doctors often have working partners and both share responsibility for raising children or caring for elderly parents, he noted.

— When Kirch graduated in 1977, only about 20 percent of medical school graduates were women; now nearly half are.

— 1 in 5 male doctors and 44 percent of female doctors employed by medical groups worked part-time last year, according to an American Medical Group Association survey. That compares with just 7 percent and 29 percent respectively in 2005.

— A 2011 survey of finalyear medical residents conducted by national physician recruitment firm Merritt Hawkins found that only 1 percent wanted to work as solo practitioners, running their own small medical offices.

Those two specialties are popular among young doctors, who on average face more than $150,000 in medical school debt. The others are radiology, ophthalmology and dermatology, all offering better pay and work hours than primary-care medicine.

Also rising in popularity are hospitalists, a specialty that didn’t even exist a generation ago. For decades, internists and other primary-care doctors have typically provided part-time care for their patients when they were hospitalized. Increasingly, hospitalists have taken over those duties full time. They often work several 12-hour shifts in a row, with an equal number of days off — the so-called seven on-seven off model.

He’s getting married in November and says the long stretches of time off would be more family-friendly and allow him to pursue hobbies, including snowboarding.

Kirch, of the medical college association, agrees. When he visits campuses and asks students how they differ from his generation, “they almost always point to the readiness with which they embrace technology.”

He’s noticed another trend on those visits. Schools used to show off vast medical libraries, “taking pride in how many volumes were sitting on the shelves,” Kirch said.

Now, less is more. At one of the newest medical schools, the University of Central Florida in Orlando, “they point with pride to one small room near the entrance, and in that room they hold the books and journals that cannot be accessed online.” Their goal, Kirch said, is for that room to be empty.