By LOU KESTEN
The Associated Press 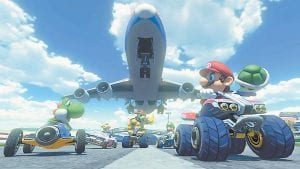 This photo from Nintendo shows a scene from the video game, “Mario Kart 8.” (AP)

1. “Dragon Age: Inquisition” (BioWare, for Play- Station 3, PlayStation 4, Xbox 360, Xbox One, PC): BioWare’s overstuffed roleplaying epic has everything you could want in a fantasy saga: war, magic, exploration, romance and, yes, dragons. I’ve spent 200 hours in its lush, frightening world and there are still huge areas I’ve barely visited. I can’t wait to get back.

2. “ Hearthstone: Heroes of Warcraft” ( Blizzard Entertainment, for PC, iOS and Android): Blizzard Entertainment, masters of massively multiplayer online worlds, scaled down with this delightful collectible card game. It’s simple enough for any newcomer to enjoy, but you’ll want to spend hours tinkering with your deck. Each card is so beautifully detailed that you can almost see the monsters within coming to life.

3. “Valiant Hearts: The Great War” (Ubisoft Montpellier, for the PlayStation 3, PlayStation 4, Xbox 360, Xbox One, PC, iOS and Android): This stirring war drama tells the story of a European family torn apart by World War I and the brave dog that helps them. There are no rah-rah heroics, just the humble efforts of some ordinary people trying to survive a horrific calamity. The ending is one of the most heartrending moments in game history. 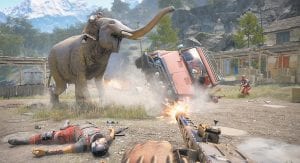 A scene from the video game, “Far Cry 4.” (AP Photo/Ubisoft)

4. “South Park: The Stick of Truth” (Obsidian Entertainment, for PlayStation 3, Xbox 360 and PC): From the sublime to the ridiculous, as Cartman and friends defend their town from aliens, Nazi zombies and Al Gore, “Stick of Truth” goes way beyond your typical licensed-game fan service, delivering a terrifi c role-playing game that doubles as a savvy parody of the genre’s cliches.

5. “Middle-earth: Shadow of Mordor” (Monolith Productions, for PlayStation 3, PlayStation 4, Xbox 360, Xbox One, PC): In Monolith Productions’ brilliant take on J.R.R. Tolkien, you must challenge a series of orc warlords before going toeto toe with their evil boss. The result rewards a smart strategic approach as much as skillful swordplay, and it’s utterly unique.

6. “Monument Valley” ( Ustwo, for iOS and Android): Each of the three-dimensional landscapes here looks like an M.C. Escher drawing, with paths and staircases that seem impossible to traverse. To find the exit, you need to change perspective and rotate parts of the structure. A haunting soundtrack hints at mysteries that may never be solved.

7. “ Wolfenstein: The New Order” ( Machine- Games, for PlayStation 3, PlayStation 4, Xbox 360, Xbox One, PC): We got a bunch of new first-person shooters in 2014, but the freshest was this revival from Sweden’s MachineGames. Set in an alternate Europe where the Nazis won, it’s an expertly paced thriller with a cast of resistance fighters that I found myself caring about.

8. “Captain Toad: Treasure Tracker” (Nintendo, for Wii U): Nintendo’s Wii U console finally found its mojo with several big multiplayer games, but I preferred this low-profile puzzler starring one of the company’s most endearing bench players. Its 3D mazes are first- rate, and you’ll want to spend hours exploring every nook and cranny.

9. “Far Cry 4” (Ubisoft Montreal, for the PlayStation 3, PlayStation 4, Xbox 360, Xbox One, PC): Ubisoft has become the king of sprawling, open-world action games. “Far Cry 4” is the best of this year’s batch. The new Himalayan setting offers not just breathtaking scenery but also the opportunity for all kinds of high-altitude high jinks. The chance to mow down your enemies while riding a rampaging elephant is worth the price of admission.

10. “ Threes!” ( Sirvo, for iOS, Android and Xbox One): A small studio named Sirvo launched this elegant $3 math game early this year — and then promptly got ripped off by a wave of free copycats. Fork over the cash for the original, whose smart design turns a simple premise into an enthralling, infuriating instant classic.

The top 10 video games of 2014, according to AP Entertainment Writer Derrik J. Lang:

1. “Dragon Age: Inquisition” (BioWare, for Play- Station 3, PlayStation 4, Xbox 360, Xbox One, PC): Despite its grander-thangrand scale, “Inquisition” is a breathtakingly detailed role-playing saga unique to each player portraying the leader of a revolution in the fantasy realm of Thedas. BioWare deserves to be heralded for its commitment to storytelling and creating the most engrossing journey in gaming this year.

3. “Far Cry 4” (Ubisoft Montreal, for the PlayStation 3, PlayStation 4, Xbox 360, Xbox One, PC): One of the best virtual experiences I had this year was enjoying a peaceful flight across the shadows of the Himalayas in a rickety gyrocopter only to suddenly be shot out of the sky by soldiers. Then I returned fire while parachuting down into their base. Such wild moments made the open-world shooter “Far Cry 4” a rainbow of chaos.

4. “Mario Kart 8” (Nintendo, for Wii U): Mario, Luigi, Princess Peach and company returned to the driver’s seat for more highoctane banana tossing and shell throwing in the latest installment of the longrunning kart-racing series. “ Mario Kart 8” swerved past obstacles to become the year’s most addictive game for the Wii U, thanks to an eye-popping aesthetic, user-friendly online experience and gravity-defying race tracks.

5. “Middle-earth: Shadow of Mordor” (Monolith Productions, for PlayStation 3, PlayStation 4, Xbox 360, Xbox One, PC): Set between “The Hobbit” and “The Lord of the Rings,” the liberating “Shadow of Mordor” is a revenge tale with a twist: it pays to learn about your orc adversaries, not just blindly take them down. That’s just one innovative touch in a game that makes Middle-earth feel more alive than any entry that’s come before it.

6. “Titanfall” (Respawn Entertainment, for Xbox 360, Xbox One and PC): How can you go wrong with giant robots? Respawn Entertainment dropped an army of mechanized beasts into the multiplayer shooter genre and created a rollicking new dynamic with players battling for power from both inside and outside those titillating tanks. It’s the only online shooter I kept making return trips to in 2014. Sorry, “Destiny” and “Call of Duty.”

7. “This War of Mine” (11 Bit Studios, for PC): If the virtual dollhouse series “The Sims” was set in a country where food and shelter were scare, it would be the gripping “This War of Mine.” With haunting black-and-white imagery and emotionally unrelenting gameplay, 11 Bit Studios’ account of a group of ordinary citizens struggling to survive is a reminder that games don’t have to be fun to be engaging.

8. “Sunset Overdrive” ( Insomniac Games, for Xbox One): The end of the world has never been as ridiculously entertaining as it is in “Sunset Overdrive.” Insomniac Games, the tricksters best known for the “Ratchet & Clank” franchise, daringly delivered a cartoony rendition of the apocalypse where energy drinks turn folks into monstrous creatures and electrical lines serve as modes of free-running transportation.

9. “Wolfenstein: The New Order” (MachineGames, for PlayStation 3, PlayStation 4, Xbox 360, Xbox One, PC): While most resurrections of old-school game franchises fail to re-ignite the fire sparked by their ancestors, “New Order” auspiciously reimagined Nazi-killing protagonist William J. Blazkowicz as a three-dimensional man out of time. “New Order” turned out to be a solid first-person shooter that’s anything but dim.

10. “Super Time Force” (Capybara Games, for Xbox 360, Xbox One, PC): Both ingenious and hilarious, the time-bending platformer “Super Time Force” flipped the genre on its head by pushing players to rewind pixelated, nostalgia-filled mayhem over and over again. Messing around with the space-time continuum hasn’t been this amusing since “Bill & Ted’s Excellent Adventure” — the movie, not the game.