Drake Brock — A singer of songs 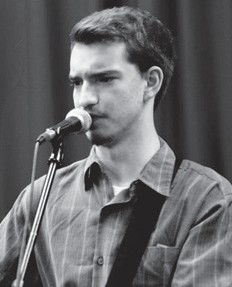 In September of 2018, I had the pleasure of meeting one of the most interesting young men that I have ever known. His name is Drake Brock and he was singing on stage at the Mountain Heritage Village on Saturday afternoon during the 2018 Letcher County Mountain Heritage Festival.

As I arrived, he was on stage singing and playing guitar like a pro, and the most surprising thing was that he had a commanding voice, deep and strong like that of Josh Turner when he sang “The Long Black Train”.

He was singing songs of Merle Haggard, Buck Owens, George Jones, Waylon Jennings, and if you closed your eyes, you would have thought you were listening to these icons. Not only did he do them justice, but if you watched this young man closely he was playing the guitar and using mannerisms of the said artists. The most surprising thing about this young man was that he was only 16 years of age.

Drake is from Pound, Va., the son of Ronnie and Sonya Brock. As I got to know Drake, I found that at his age he was already making rounds in the area’s local singing circles in both Virginia and Kentucky and he is well accepted in the singing circuit.

He has played and still does in most of the area’s outlets. Drake found his interest in singing and music at the age of 12 when his mother brought home an Alabama CD. When Drake heard the CD he began singing songs and playing guitar for hours at a time.

Drake just couldn’t stop his newfound interest. He would sing for hours at a time. He sang in school, entering in the first high school talent show at Wise Central High School in Norton, Va., and he won first place.

His first appearance on stage was at the Beckham Bates Linefork Community Center. His father is from Eolia and through the family heard about the weekly singing at the center and one night Drake, his father and mother, attended.

One of the songs being sung was Merle Haggard’s “Workin’ Man Blues” and Drake joined in on the song from the audience, and attracted one of the singers, Josh Mullett, who called for him to come to the stage and join them. And as they say, the rest was history.

His mom and dad bought him a guitar on which he learned playing and singing. He credits Fred Campbell for giving him his first guitar at the age of 14.

Drake continued to play and sing and was doing well and could play his guitar well, however he decided to join the Cowan Center Music School in 2017, and again in 2018. Then in 2019, he served as teacher assistant for the summer.

I, myself, visited the Linefork Center at Beckham Bates School about a year ago. A lot of people there know me, and told me about this young man, not knowing I already knew him. They told me how good he was and when he got to the stage he was no disappointment in playing with the bands that were there and singing solo the songs that he enjoyed so much.

Drake has played at The Log Cabin in Norton, Va., and I visited “Pickin’ At The Pound” one night when he was playing there and he was a shining star. In my conversation with him I learned that up until age 12 he had really shown no interest in pickin’ and singing, until his mother brought home that Alabama CD. Drake is a unique young man and now at the age of 18, I really believe he likes playing music more than anything else. One can see that hunger in his eyes when he talks about his love for music.

Over the past two years he has developed a good following by many people. He is known throughout Wise County, Virginia, and Letcher County, from Norton, Va., to Blackey for his accomplishments in the local music world. Drake is presently in a two-year college program in which he has now completed his first year. He also works at the Pound IGA. He is a well-rounded young man who takes his music seriously, his schooling seriously and his job seriously and he also goes to church on a regular basis. He is a determined young man in all phases of his talents, as a student, a workingman, and singer, and now at age 18 he is concentrating on finishing school and continuing to play music. After finishing school he plans on furthering his musical talent.

Drake won two talent shows at his high school, he has played in school programs, sung on a local radio station broadcast on WDXC radio, performed at the Log Cabin , “Pickin’ At The Pound”, the Linefork Center, the Mountain Heritage Stage and recently performed at Summit City in Whitesburg. He will be playing and singing in Hemphill at the Brick Oven Hemphill Community Center from 6 to 8 p.m. on Saturday night, May 29.

Drake has released his first CD, which includes a song he has written himself. Everyone I talked to at his live performances gives him high compliments, stating that “He’s good, he’s really good.”

This fellow could very well be the next rising star from our area. So if he’s playing somewhere near you this summer, come check him out. “He’s good!’