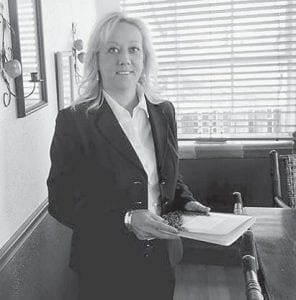 Drenda Crider, who has established a lengthy career in the hotel and leisure industry, has been chosen to lead several of the area’s notable tourist sites.

The Harlan native has been hired as Director of External Education at Southeast Kentucky Community and Technical College, and with the job she will be in charge of overseeing the day-to-day operation of the Benham School House Inn, the Kentucky Coal Mining Museum and the Portal 31 Mine Tour.

The college owns the museum and Portal 31 attractions, while Harlan County is owner of the inn with its operation delegated to the school.

Crider, who began the job several weeks ago, has charge of approximately 20 employees whose assignments are to operate the venues that are popular throughout the state as well as across the region. She will be working to improve the sites for prospective patrons and also work to more vigorously market the properties, which she calls a “well-kept secret.”

“This is a great thing we have,” she said. “While these locations have enjoyed success, I feel we can work to make them even more attractive to travelers as well as for those who live right here in the area. We are eager to get the good word out about the Benham School House Inn, the Kentucky Coal Mining Museum and Portal 31.”

The hotel, once home to Benham High School, has 30 rooms, and over the nearly 20 years of existence as an inn it has been transformed into a place for reunions, getaways, parties and other special events, including banquets, weddings, dances and dinner theater productions.

The museum, located down the hill from the inn, pays tribute to the coal industry and miners who worked to build the area. Visitors can learn about coal mining and view a reproduction of a typical coal miner’s home from bygone days. Additionally, a mock mine, located in the basement of the structure, serves to educate those to the particulars of coal mining.

Portal 31 is located in nearby Lynch. This attraction chronicles the development of mining in the town that at one time was the largest coal town in the world. Mining began at Lynch in 1917, and Portal 31 was one of the original portals producing high-quality bituminous coal for nearly 50 years before it was closed in the early 1960s. Today, the site features a 30-minute ride into the mountain where, at various stops along the route, computer-driven animatronics spring to life telling the story of the area and the evolution of coal mining.

Crider, who is married to former Kentucky State Police Trooper Ken Crider, began working in the hospitality industry in 1993 as the assistant manager of the Best Western in Harlan. She become manager before being promoted to the director of operations for Humphrey Hospitality, where she managed 17 hotels in nine states. During the past eight years, she served as a regional vice president for Resort Housekeeping, Inc. She directed 16 properties in nine states.

“We have so much to be proud of here in our area,” she said, “these locations are a jewel that many don’t know of, or, they know very little about. It will be our goal, or mission, to make the inn, museum and the portal quality destinations for folks to enjoy and to be excited about.”

As the holiday season arrives, Crider said the inn and museum are bustling with activities including the Festival of Trees display at the museum. The inn will be the place for several holiday events and also offers catering for holiday entertaining needs. For more information, contact Crider at (606) 848-3000.