Drilling into the past

By KATHERINE JENNINGS
The Ledger Independent 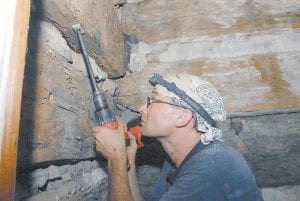 Darrin Rubino takes a core sample from a log in a cabin that was built in Maysville, Ky. Rubino, a professor of biology at Hanover College in Hanover, Ind., spent two days in Mason County taking core samples of timber from four houses owned by the Mason County Historical Society, including the Stanley Reed house, in a field of study called dendroarcheology. (AP Photo/The Ledger Independent, Terry Prather)

Rubino, a professor of biology at Hanover College in Hanover, Ind., spent two days in Mason County taking core samples of timber from five houses, including the Stanley Reed house owned by the Mason County Historical Society, in a field of study called dendroarcheology.

The process starts with a boring bit on the end of a drill, eased into the timbers that make up the walls and beams of the house. The bit removes a perfect cylinder of wood that is then put through a 10 step sanding process. Once polished, Rubino said he counts and measures the rings, with an accuracy down to threeten thousandths of an inch. From there he graphs the measurements and looks for patterns between the wood samples. Once each core is removed it represents a further 40 hours of work.

“Between the sanding, measuring, cursing and remeasuring,” Rubino said.

Rubino uses the measurements to determine the age of structures that have gone through many transformations, or have only vague written histories.

While he said it is possible that timbers could be scavenged from one structure and used in another, if all samples from a structure point to the same year, it is safe to assume the age of the house, especially if their findings are backed up by architectural details.

For instance, Rubino said the Stanley Reed house, the last structure he investigated in Mason County is obviously old, probably the oldest building he has investigated. He can tell by the way the house is pegged together, not nailed, and how the timbers are rough and hand split, not to mention the sheer size of the timbers.

“These are the largest diameter timbers I’ve ever seen used before,” Rubino said. He figures the house was built in the late 1700s or early 1800s. His samples will tell him for sure.

Rubino said he thinks the timbers in the house stood on the property as trees, and when the land was cleared, the cut trees were used to build the house. If so, it would have been the first time the property had ever been cleared.

“We really do enjoy trying to figure this stuff out. It’s important. We won’t just date the building, we’ll find out climate in the region in the 1600s,” Rubino said.

He said the climate record for Kentucky and similar areas where there is little or no written climate record going back to the 1600s, is contained within the rings of the trees where the size of the ring shows the growing conditions of the season, whether it was wet or dry, warm or cool.

“All of our old trees are gone. The oldest trees with the best records are in these buildings,” Rubino said.

Rubino said dendroarcheology, a field he wound up in completely by accident, is widely used in Europe, and becoming more popular in New England, but isn’t something that has caught on in the Midwest.

He said it really wasn’t something he considered either, until he moved to Indiana to teach at Hanover.

“I saw all sorts of old buildings. They looked like they’d be a great resource,” Rubino said.

Mayor David Cartmell said there are plans to restore the house, donated to the county historical society by the Reed family. It will eventually become the Stanley Reed museum and William Akin library.

“First we want to know everything about it we can find out,” Cartmell said.

Cartmell said Rubino’s work is “a fail proof way of determining the real age of structures.”

He said the true ages often aren’t known because, while the histories of the structures are passed down by word of mouth, it might not be written down for years, and by then details are often muddled.