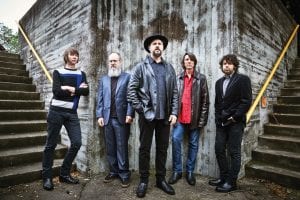 Southern rock and eastern Kentucky country will share the stage on Sunday, September 24 when the Drive-By Truckers of Alabama and Tyler Childers, formerly of Paintsville, perform at the Hal Rogers Center in Hazard.

The Drive-By Truckers have been performing since 1996, but their career took off in 2001 with the release of the double album Southern Rock Opera, which is based on the history of Lynyrd Skynyrd in the 1970s. The band is currently touring in support of its 11th studio album, the acclaimed American Band.

Childers, a 25-year-old rising star, is a longtime fan of the Driveby Truckers, whom he credits for his development as a singer and songwriter. Tickets for the show are on sale now for $35 and $45 by calling promoter Greg Napier at 1-606-434-8648. The Hal Rogers Center is located just off KY 15, between Hazard High School and Cardinal Chevrolet.