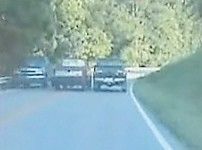 This image captured by a video camera mounted on a Letcher County Sheriff ‘s Department cruiser shows a pickup allegedly being driven by Ethan Kisor as it drves between two other pickups on a narrow section of KY 7.

Police have arrested the driver of a small pickup truck who led them on a 20- mile chase in the Jeremiah area last week.

Damron said that by driving recklessly on KY 7, at one point narrowly missing a head-on collision, Kisor endangered the lives of two police officers, the passenger in Kisor’s pickup, and three people riding in the two vehicles Kisor drove between on the narrow road.

Damron said he attempted to stop the 1986 Ford Ranger being driven by Kisor at on June 29 because the truck did not have a visible license plate.

Damron said he turned on his lights and siren, but that Kisor continued driving south on KY 7 to Doty Creek.

Kentucky State Police Trooper Randy Surber was in the area patrolling and assisted Damron in the chase, which lasted about 31 minutes at speeds of up to 70 miles per hour.

Police say they lost Kisor when he drove up a rough road leading to an abandoned strip mine at Carbon Glow. The road was too rough for travel by police cruisers.

Damron said video cameras purchased with coal severance money allowed the sheriff’s department to obtain evidence that normally wouldn’t have been available in such cases.