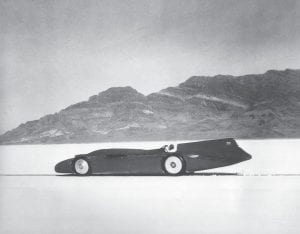 British automobile racer Sir Malcolm Campbell sped across the salt bed in his Bluebird and set a world record of 301.337 miles per hour on the Bonneville Salt Flats in Utah on September 3, 1935. (AP Photo)

On September 3 and 4 in 1935, the lead stories on sports pages across the U.S. carried the news that driver Sir Malcolm Campbell was attempting to — and was successful in — setting a new land speed record.

The September 3 papers carried reports about Campbell being on the Bonneville Salt Flats in Utah the day before, where he conducted a trial run in his giant Bluebird automobile — the same ride in which he would be attempting to break his own speed record of 276.816 miles an hour.

During the September 2 trial run, the 50-year-old Englishman sent his 2,500 horsepower machine roaring over the salt beds at a clip of 240 miles an hour.

The performance of “The Old Lady,” as Campbell affectionately called his odd shaped racing car with its shovel nose and huge finlike tail, satisfied him in every detail.

The Associated Press reported that Campbell “was happy as a schoolboy as he squeezed out of the tiny cockpit at the end of the 13- mile straightaway.”

Last February, Campbell set his current speed record in the sand at Daytona Beach, Fla. He promised that his six-ton car would do much better at Bonneville.

On September 3, his new world record of 301.337 miles an hour was recorded by officials with the American Automobile Association and witnessed by thousands.

After setting the new record, Campbell said his next hope was to become the first to travel five miles a minute or faster.