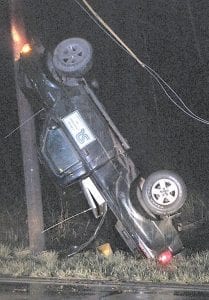 POLE(AR) OPPOSITES — This pickup came to a rest against a utility pole after the driver lost control Monday night. (Photo by Courtney Vaughn)

A Jackhorn man has been charged with driving under the influence and possession of a controlled substance after an unusual accident involving the pickup truck he was driving and power pole at Neon Junction earlier this week.

Jerry Vanover, 38, was driving a Ford Ranger Edge on KY 317 Monday night when he lost control of the truck and went off the roadway. The truck then hit a set of guy-wires attached to a power pole, said Fleming-Neon Police Officer Tom Bormes.

“It slid up the guy-wires, just like you are going up a ramp,” said Bormes. “The vehicle spun completely around and hit the power pole hood-first and came to a rest standing vertical against the power pole.”

Vanover was taken to the Whitesburg Appalachian Regional Hospital where he was treated for injuries and released.

Because of the injuries Vanover suffered, he was not arrested, said Bormes. Instead, he was cited with driving under the influence and possession of a controlled substance.