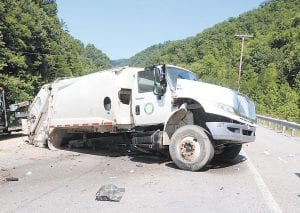 A City of Jenkins garbage truck came to a rest across the northbound lanes of U.S. 23 at Dorton on Monday after a crash which sent the driver, city employee Ben Smith, to the hospital. Kentucky State Police Trooper Darren Stapleton said Smith told emergency personnel that he heard a loud “pop” come from the truck, after which he lost control while descending Dorton Hill. Stapleton said the truck overturned at least three times, adding that Smith’s seatbelt likely saved his life. (Photo by Chris Anderson, courtesy Appalachian News-Express)