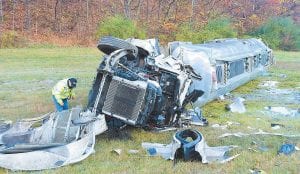 Jenkins Police Chief Jim Stephens examines the wreckage of a tanker truck that crashed Saturday on U.S. 23 at Jenkins. Stephens said the driver of the truck, which was operated by Barger Transport of Gate City, Virginia, was ejected during the crash. The driver was airlifted from the scene by Wings Air Rescue to Holston Valley Medical Center in Kingsport, Tennessee. His condition was unknown at presstime. The truck was carrying 8,600 gallons of gasoline when it wrecked and overturned, and some of the payload spilled onto the ground. Cleanup efforts are still ongoing. (Photo by Chris Anderson)