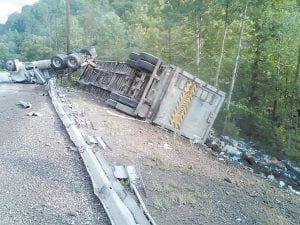 Charles Smith, 46, of London, died after the tractor and garbage-filled trailer he was driving overturned Monday while Smith was driving north on KY 15 near the Knott-Letcher county line. (Photo by Connie Fields)

A Laurel County man died Monday after the tractor-trailer he was operating overturned near the Knott/Letcher county line.

Kentucky State Police said Chester Smith, 46, of London, was traveling north on Highway 15 at Redfox at 8:35 a.m. when the 2001 Peterbilt tractor and trailer suddenly veered off of the road and hit a guardrail before overturning. The rig, owned by Watco LLC of Somerset, was loaded with landfill garbage.

Police say Smith was not wearing a seat belt and was trapped inside the truck cab before being extricated by rescue workers with Letcher Fire & Rescue and the Vicco/Sassafras Fire Department.