Driver movement should heat up 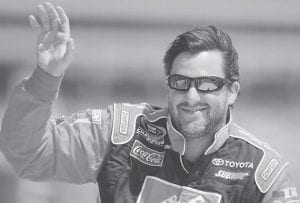 Tony Stewart’s saying good-bye to Joe Gibbs Racing at the end of the season doesn’t haveNASCAR’s top-tier drivers looking to take his place in the No. 20 car. (AP photo)

The biggest domino in NASCAR’s free agency season fell when Tony Stewart decided to bolt from Joe Gibbs Racing at the end of the year. It opened up a seat in the coveted No. 20, a ride loaded with a two-time championship winning team that will stay behind crew chief Greg Zipadelli.

The next domino is Ryan Newman, and the Indiana native has long been expected to choose Indianapolis Motor Speedway, site of Sunday’s Brickyard race, to reveal where he’s headed. All signs have pointed to Stewart’s new venture at Stewart-Haas Racing, and Newman waited just a few days after Stewart’s deal was complete to announce he’s leaving Penske Racing at the end of the year.

Yet despite the promise and potential in the latest job opening with Gibbs, top-name drivers aren’t exactly jockeying for the No. 20 seat.

Matt Kenseth is under contract, Kasey Kahne isn’t available, Richard Childress has his talent under contract and the stars at Hendrick Motorsports aren’t going anywhere.

So where does that leave Joe Gibbs Racing?

With Joey Logano, of course.

Gibbs officials have done nothing to dispel the notion that their 18-year-old phenom will fill the seat next season, and Stewart himself has endorsed the promotion.

“Of all people, he could do it. He’s been a proven product in anything that he’s driven,” Stewart said on his Sirius Satellite Radio show. “I definitely think that Joey Logano has the talent that whenever – and I would say he’s going to be in the Gibbs system a long time – so whenever the Gibbs family decides to put him in a Cup car that he’ll be ready.”

Zipadelli, who so patiently nurtured Stewart over the past decade, already has faith in Logano based on the few years the teenager has been in JGR’s developmental system. He’s tested with the kid, and based on feedback and on-track performance, is quick to argue Logano is far ahead of his age.

But with just five Nationwide Series starts to his career (albeit he’s scored two poles and a win in that span), Zipadelli also admits there still are questions surrounding Logano.

“Experience is priceless,” Zipadelli said. “It’s one thing to do it in other divisions, but when they feed you to the sharks out here (in the Sprint Cup Series) on Sunday, you’re going against the best in the world that have tons of experience. There’s a lot to this sport … mental, physical … and that all comes with time.

“I think what we’ve seen so far, I think he has as good of a chance as any 18-year-old to come into this sport and succeed.”

With everyone so high on Logano, only the sudden availability of an A-list driver should block his imminent promotion into Stewart’s seat.

That means Stewart’s departure shouldn’t create the big shuffling of rides that was widely anticipated – though there’s still going to be movement.

Perhaps as early as this weekend, when Daytona 500 winner Newman could announce his next job.

It’s plausible that Gibbs could swoop Newman up and put one of NASCAR’s greatest qualifiers in Stewart’s old seat. Richard Childress could potentially persuade Newman to jump into his expanding fourth car. But all signs point to an all-Hoosier lineup at Stewart’s new team.

With Newman’s seat available, that could be filled by David Stremme. Out of the Cup Series all season, Stremme smartly declined opportunities to get in sub-par seats, a decision that landed him a deal as Penske’s test driver this spring.

When Dario Franchitti broke his foot, opening up Stremme’s old seat at Ganassi, he was unable to secure permission to fill in beyond a one-race emergency substitution. It raised questions about what kind of contract Stremme had agreed to with Penske.

Why would a guy in search of a full-time Cup ride agree to a test contract that didn’t have an out if a seat became available? Because he already had a job lined up, of course.

Casey Mears is on the market now that Mark Martin has nabbed his ride at Hendrick, and Martin Truex Jr. has yet to come to terms with Dale Earnhardt Inc. on his 2009 option year. One of the two could end up in Childress’ No. 33, a ride loaded with potential but also with risks because it will start next season outside the top 35 in points. Because it will have to qualify for the first five races of next year, many top names weren’t interested in the job, making it possible that a second-tier driver will get a chance in No. 33.

It could be Mears, who also is rumored to be in the running for a seat at Gillett Evernham Motorsports, while Truex might ultimately sign a long-term extension with DEI. That Truex still hasn’t locked anything else up is good news for DEI, but the company has been plagued with sponsorship and stability questions that likely have Truex still scouring the market.

Assuming Stewart overhauls his new team and does bring Newman in, Scott Riggs will be out of a job and forced to join the flock of third-tier drivers that bounce from ride to ride. He could end up in a job with Petty Enterprises, particularly since David Reutimann has confirmed his commitment in sponsor-troubled Michael Waltrip Racing.

With all the seats filling up, Reed Sorenson will probably end up re-signing with Ganassi. He’s not likely to get a better offer than the No. 41 Dodge he currently drives.

The wild card, of course, is the economy. With so many companies struggling to find sponsorship dollars, teams that exist now may fold like Franchitti’s No. 40 did last month. That could put numerous drivers out of work, flooding the market with talent willing to drive on the cheap.

One thing is certain, though – the next month promises to be a busy one, with everyone ready to move now that Stewart is settled.