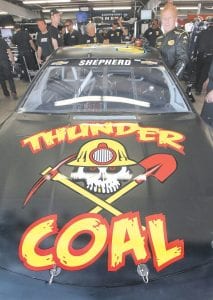 Driver Morgan Shepherd is seen climbing into his car as he got ready for practice for this past Sunday’s Sprint Cup Series auto race at New Hampshire Motor Speedway. Shepherd, 72, is being blamed by some who think he is too old to race for wrecking driver Joey Logano.(AP Photo)

It’s been almost two decades since Morgan Shepherd last ran a full Sprint Cup season, and his last national series victory was in 1993.

He can still probably wheel a race car better than you and most of your friends. That doesn’t mean the 72-year-old should be racing against the very best drivers in NASCAR.

Shepherd was 40th, 16 laps off the pace, when second-place Logano tried to pass the slower car. Replays show little, just that Logano ended up with a wrecked car. He then publicly questioned if there should be driving tests for some competitors.

NASCAR dismissed Logano’s notion, pointing out Shepherd has been approved to drive since 1970.

“He’s been approved for decades,” NASCAR vice president of competition Robin Pemberton said. “You take a physical at the beginning of the year. You pass your physical. You pass inspections with your car, you qualify for the race and you run the event. He met everything he needed to meet.”

That’s the problem. There is no rule in place — except for drivers under 18 years old — stopping someone from competing in a national level NASCAR race.

Mark Martin, his back aching and his eyesight no longer what it once was, called it quits last year at 54. If he wanted to race next week at Indianapolis, nobody would stop him if he showed up in a car that made the field.

Michael Waltrip, at 51, still runs four races a year. His Hall of Fame brother, Darrell, was 53 when he got out of the car following eight winless seasons.

Point is, rarely does a driver recognize when to call it a career. The love of racing, the addiction to speed, the thrill of competition, can all cloud a driver’s judgment and make it impossible to see they aren’t what they once were.

That’s all allowed in a sport that often fails to set standards to ensure only the best compete at the top level. In racing, those who find the dollars needed to race get the seats — often at the expense of the most talented.

So Shepherd got the funding — probably about $75,000 — to run for Circle Sport Racing at New Hampshire. For the second time this season, he was in the field with the big boys.

But the big boys passed him again and again as Shepherd struggled with handling and perhaps meeting the minimum speed of 115 mph. NASCAR said Shepherd was not warned about failing to keep pace during the race.

Shepherd did try to stay out of the way. But spotters alleged Shepherd couldn’t hold his line at the bottom of the track and hit the corners at such a poor angle, his car would push into the center of the track. Logano spotter Tab Boyd tweeted he was “riding around like a rolling road block.”

Shepherd, though, put the blame on Logano and said his age was not a factor.

“When he laid close to me, it caused me to slip into him,” Shepherd said. “It’s got nothing to do with my age or anything else. I’ve always said if I go out and I start hitting the wall and stuff, making mistakes, I’ll get out of the car.”

Fans seemed to flock to Shepherd’s defense, calling the No. 33 Chevrolet subpar equipment. Well, that’s on Shepherd, who could have taken his cash to any team in an attempt to get a better ride.

The ride isn’t great, but Bobby Labonte drove the same car to a 24th-place finish at Daytona. Three other drivers have driven the car this year without crashing the leaders.

Had Shepherd had an uneventful run at the back of the field all day, nobody would have said a word about his presence in the race. Nobody would have noticed him. But he was involved in one glaring incident that NASCAR must consider going forward.

Sure, blame the car. But there’s a reason Shepherd doesn’t get to drive Jimmie Johnson or Jeff Gordon’s car — because he’s 72.

NASCAR must take a longer look at this because what Shepherd did 30 years ago or three years ago no longer applies. Father Time eventually catches up with everyone, and your eyes aren’t what they used to be, and your reflexes aren’t so catlike and your hand-eye coordination isn’t as sharp as you remember.

Maybe there’s no way for NASCAR to monitor those crucial elements of driving. But NASCAR can monitor minimum speed and the ability to hold a proper racing line.