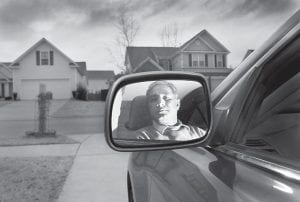 Venkat Thannir posed in his 2010 Toyota Camry at his home this week in Lexington, S.C. In the fall, Thannir’s car accelerated on its own as he was pulling out of a parking lot in a Burger King in North Carolina. He has not taken his car in for the recall. (AP Photo)

You’re driving down the highway and suddenly your car starts accelerating on its own. Knuckles white, going from 60 to 90 miles an hour in a couple of seconds, you do what comes naturally — hit the brakes. But what if the car keeps going?

There are options: Put the car in neutral, or in park, or switch off the ignition. But experts say those choices would be almost impossible for most drivers to consider when they’re in a panic, because frightened people often can’t remember even simple steps to protect themselves. That — coupled with increasingly complicated gadgetry — makes cars a dangerous place to be when you’re facing an unexpected situation.

“You’re stamping on the brakes and your attention is going to be focused on where you’re going and steering. There’s no cognitive space left to think of alternatives,” said Dr. Boadie Dunlop, a psychiatrist and director of the Mood and Anxiety Program at Emory University. “To do something that’s not natural, such as turning off the engine, is just not going to come to mind.”

Toyota Motor Corp. said Tuesday it is recalling about 437,000 Prius and other hybrid vehicles worldwide to fix a problem with brakes that are momentarily unresponsive in certain driving conditions.

That follows the automaker’s recent recall of 5 million vehicles because of reports of unintended acceleration, and it’s changing the gas pedals to prevent floor mats from jamming them. But complaints about unwanted acceleration in Toyota vehicles go back at least to 2003, according to U.S. government filings.

The issue gained new urgency last August, when a high-speed crash near San Diego killed an off -duty California highway patrol officer and three family members. The officer’s loaner Lexus ES350 reached speeds of more than 120 mph, struck an SUV, launched off an embankment, rolled several times and burst into flames. The family frantically called 911 from the car, telling the dispatcher the pedal was stuck and they couldn’t stop.

It’s not known what exact steps the officer took in that case, but Dunlop said in such a situation, the brain can’t handle all the information it’s getting.

“When people are in an intensely fearful situation, their ability to problem-solve is greatly diminished,” he said.

Venkat Thannir had his own brush with panic a few months ago. The 48-year-old college instructor from South Carolina was pulling his 2010 Toyota Camry out of a Burger King parking lot when it sped up without warning. He panicked for several seconds before pushing hard on the brake pedal and stopping the car.

“The vehicle was out of control,” he said. “If I was not in a parking lot, it could have been a whole diff erent story.”

Thannir never figured out exactly what happened, but believes the pedal was defective, since he considers himself a safe driver. He got the gas pedal repaired last Saturday, and says he feels safe driving the vehicle for now.

Drivers have an array of safety features, including push-button stop in some cars. But the lack of standardization for those features further hinders peoples’ ability to react to unexpected situations, since they vary from vehicle to vehicle, according to Paul Green, a research professor at the University of Michigan Transportation Research Institute.

Consumer Reports has criticized Toyota for the push-button ignition in Toyota and Lexus vehicles, which requires drivers to hold down the button for three seconds to turn off the vehicle in an emergency. Drivers of Cadillacs, Nissans and Infinitis can shut off the engines by pushing the button more than once.

“The design solution is to make them all work the same way,” Green said.

Green said there’s also been little research into the way safety features are laid out in the car. Is it easy to reach down and put the car in neutral? Should neutral be in a diff erent order on the shifter so it’s faster or easier to act? With push buttons, he said, one of the biggest concerns was whether children would be able to reach over and press them, not whether they were intuitive for drivers to use in an emergency.

Green said vehicles are getting so complex that the extent to which drivers can understand their cars is diminishing. In one recent analysis, the institute projected that the owner’s manual and navigation manual for a luxury vehicle will grow to 1,000 pages over the next decade.

“Can you conceive of a person reading all this stuff and remembering all of it?” he said.

In the meantime, prepare yourself. Peter Norton, an associate professor of psychology at the University of Houston, said drivers should sit in their cars and go over the steps they could take in an unexpected situation. It’s the same reason military personnel practice simulated battles or flight attendants repeat safety instructions on every flight.

“It’s most helpful for a person, when you do go into panic mode, to resort to a natural tendency,” he said.

“If you practice something over and over, that will be the thing that happens.”