Drivers get an eyeful of 2 males on KY 15 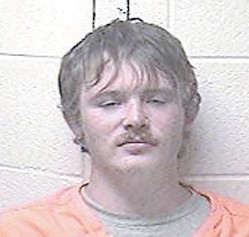 Police say traffic came to a standstill one night last week on a Dry Fork highway when a 21-year-old Isom man and a juvenile male darted out in front of traffic, then jumped on the hoods of some vehicles and gestured at others while barely clothed.

Joshua Mullins, wearing only a shirt and shoes, was arrested at 9:24 p.m. on May 28 and charged with public intoxication (controlled substance), first-degree disorderly conduct and first-degree indecent exposure (first offense).

The juvenile, who was wearing only shorts and boots, was charged with fleeing, terroristic threatening, alcohol intoxication and disorderly conduct.

Lt. Brian Damron of the Letcher County Sheriff ’s Department said Mullins and the juvenile showed symptoms that would be seem in someone who used synthetic drugs such as bath salts or synthetic marijuana.

Damron said both exhibited signs of excited delirium, a condition that is caused when body temperature elevates to the point it could shut down organs and result in death. Those experiencing excited delirium often get so warm they feel the need to remove their clothes to cool down, he said.

Police found the juvenile hiding at the bottom of a hillside near KY 15.

Mullins and the juvenile were taken to the Whitesburg hospital and were treated.

Mullins remains in the Letcher County Jail. Bond is set at $10,000 surety with house arrest.