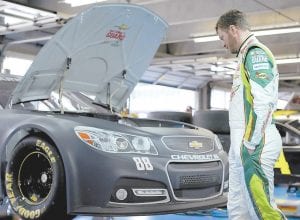 There’s not much news this time of year, but most of it’s good.

NASCAR is implementing a new car next year. Officials are still tweaking and fine-tuning and sending drivers out to test it one way and then another, as at Charlotte Motor Speedway earlier this month. The Sprint Cup teams know basically what their cars are going to look like, but not completely.

Last week seemed almost like Christmas shopping. Everyone bought the presents but still had to get them wrapped.

Judged on some of the color schemes that have been leaked to the public, there’s a lot of new wrappers, too.

“The cars feel good,” Matt Kenseth said. “They’ve got a ton of grip. I felt like they had a lot of rear grip, especially with that cambered rear end. I’m not sure if that’s necessary or not, but overall, it just seems like a lot more grip than when we raced here (Charlotte) in the fall.”

Most everyone is accentuating the positive, which is always the norm once one season ends and another beckons.

The Cup champion, Brad Keselowski, thinks it’s important to get whatever edge can be had early in the season.

“Obviously,” he said, “the faster you get a hold of the speed, speed is the basic necessity of a winning team, but that’s not all it takes. It takes a lot more than speed to win, and you still have to have some of the other things that go with it, which are execution and good fortune, and you have to have all of those other pieces that we could list out for days, but speed is the backbone of this sport and any team’s success.”

Keselowski was talking about speed as in “having more of it than the next guy,” but it appears as if speed in general will rise. Most drivers are expecting a bevy of track records to fall with the new car.