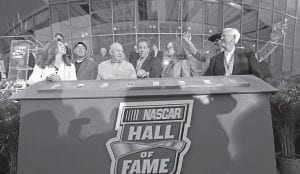 The NASCAR Hall of Fame opened its doors with a star-studded ceremony showcasing many of its stars.

The ceremony ended after NASCAR pioneers Richard Petty and Junior Johnson drove replicas of their old cars onto the plaza. The only two living members of the incoming inaugural five-member class, Johnson and Petty received a standing ovation.

It was a fitting close to a celebratory day for the sport. But for a few moments, as security cleared the plaza for Petty and Johnson’s arrival, there was a quiet murmur that perhaps NASCAR’s current stars were about to arrive.

Gordon, Johnson, Stewart and Matt Kenseth were the only four active Cup champions missing from the ceremony. Earnhardt, NASCAR’s most popular driver and a two-time champion in NASCAR’s second-tier series, wasn’t there despite the upcoming induction of his father.

Their absence did not go unnoticed. Petty, a seven-time champion and NASCAR’s all-time winningest driver, thought their absence was wrong.

“A lot of these drivers that are doing pretty well today don’t realize what some of the guys went through to get it to this point,” Petty said last weekend. “A lot of us old timers look back and hope that the guys that are doing it now appreciate what the guys did who laid the groundwork.”

All four champions had various reasons for missing the ceremony. Gordon cited a prior commitment and Johnson said he was on one final vacation with his wife before the couple welcomes their first child this summer. The slumping Stewart was testing with his team in Virginia, while a spokesman for Earnhardt said there had been confusion as to which events the driver was to attend.

It all speaks to a large scheduling problem. NASCAR runs a 38-race schedule over 11 months that takes drivers and teams from home a minimum of three days a week. Throw in sponsor appearances, business obligations, team meetings and personal responsibilities, well, it barely leaves time for a haircut some weeks.

It doesn’t make skipping certain events right, though. After all, just about everyone, no matter the profession, is busy. Family, work and life’s day-to-day nuances have stretched folks, and it doesn’t matter if they drive race cars for a living.

In this instance, current NASCAR drivers could choose to attend three Hall of Fame events honoring the men who over the last six decades paved the track where they now earn their fortunes. Gordon and Johnson said they’ll intend this Sunday’s induction ceremony. So will Earnhardt, who also plans to sit with his family during a Thursday night gala to honor the inductees.

Stewart, according to event organizers, is not planning to attend either event. Why? Organizers said they were told the two-time champion is busy, and has places to be and things to do.

In fairness to Stewart, he’s far from the only driver who will miss Sunday’s induction. That’s doesn’t make it OK.

Junior Johnson, a former moonshiner who turned his ability to build a fast car and outrun the law into a legendary NASCAR career as a driver and owner, said during the opening ceremony that his inclusion in the inaugural class was “the greatest thing that’s ever happened to me.” Ned Jarrett, a two-time Cup champion, had tears in his eyes when he said if he’s ever elected to the Hall, it would “be the ultimate. If I ever get in here, it’ll be complete.”

This Hall of Fame is cherished — and long overdue — to the hundreds of drivers who never got rich, to the mechanics who traded families for race cars, and to the owners who poured every last dime into their pursuit of Victory Lane. Without the France Family, there is no NASCAR. Without Petty, there is no Dale Earnhardt or Jeff Gordon. Without Gordon, there is no Jimmie Johnson.

There wasn’t supposed to be any confusion about the importance of this week, either.

Attending the induction and making this week spectacular was made easy for everyone when NASCAR made it the final event of All- Star Week. Festivities begin Sunday morning, hours after one driver will pick up a $1 million paycheck — think Richard Petty might have liked an occasional $1 million payday? — for winning the All-Star race.

Figuring everybody was already in town for the show, scheduling it for the next day sure seemed like a no-brainer.

Everybody at one time or another has been dragged somewhere. “But, Mom! I don’t want to go Aunt Myrtle’s house! All my friends are going swimming!”

We’ve all begrudgingly bypassed a fun day with friends. Sometimes we do what we do — or what we’re told — because it’s the right thing.